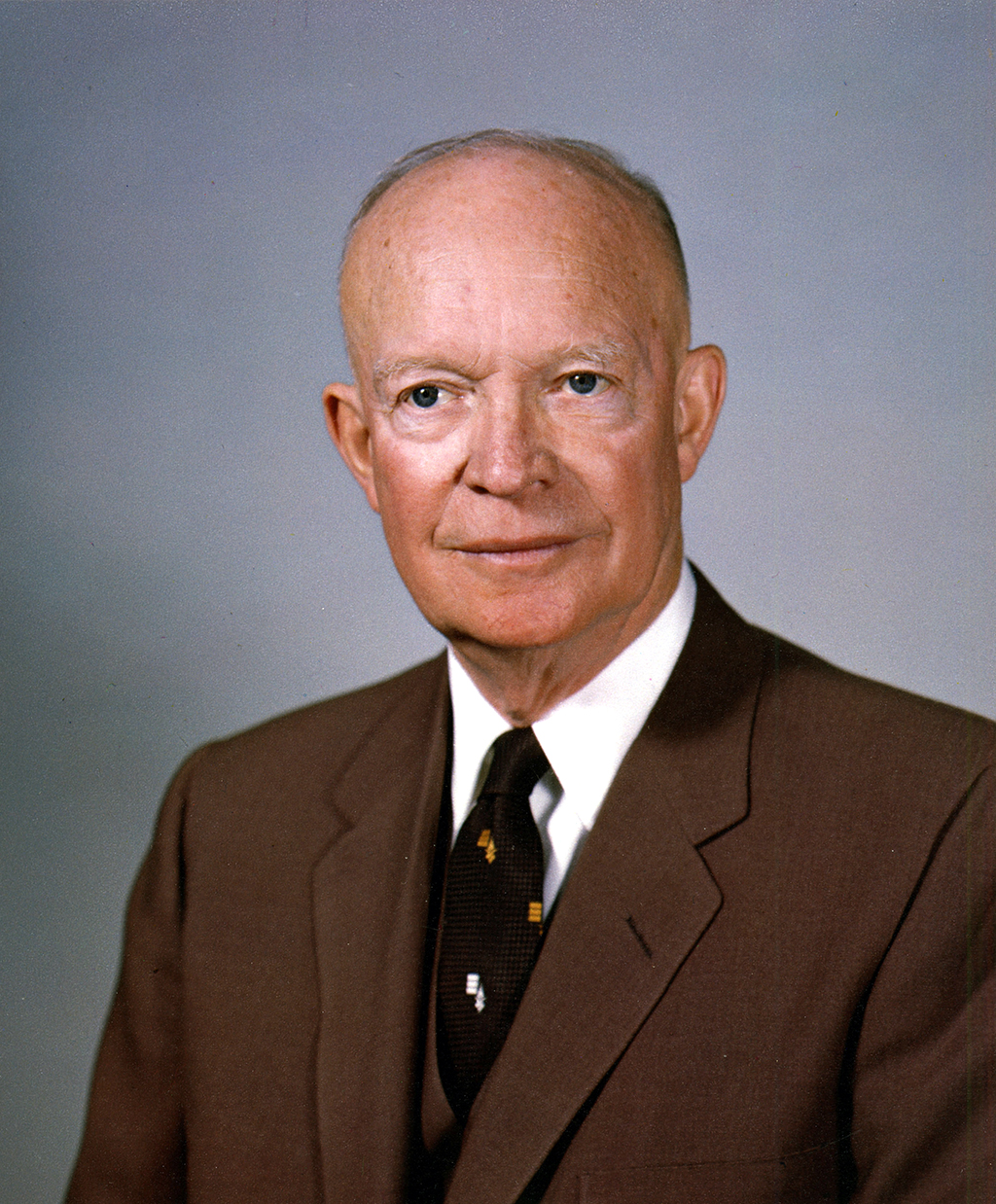 The Little Rock Crisis erupted in September 1957 when Arkansas Governor Orval M. Faubus used state National Guard troops to prevent nine African American students from attending the then all-white Central High School.  On September 20, Federal Judge Ronald Davis ordered Governor Faubus to remove the troops and allow the integration of the school.  When he defied the court order, President Dwight Eisenhower dispatched nearly 1,000 paratroopers and federalized the 10,000 man Arkansas National Guard to insure the school would be open to the nine students.  On September 24, 1957, President Eisenhower addressed the nation to explain his actions.  That address appears below.

Good Evening, My Fellow Citizens: For a few minutes this evening I want to speak to you about the serious situation that has arisen in Little Rock. To make this talk I have come to the President’s office in the White House. I could have spoken from Rhode Island, where I have been staying recently, but I felt that, in speaking from the house of Lincoln, of Jackson and of Wilson, my words would better convey both the sadness I feel in the action I was compelled today to take and the firmness with which I intend to pursue this course until the orders of the Federal Court at Little Rock can be executed without unlawful interference.

In that city, under the leadership of demagogic extremists, disorderly mobs have deliberately prevented the carrying out of proper orders from a Federal Court. Local authorit

This morning the mob again gathered in front of the Central High School of Little Rock, obviously for the purpose of again preventing the carrying out of the Court’s order relating to the admission of Negro children to that school.

Whenever normal agencies prove inadequate to the task and it becomes necessary for the Executive Branch of the Federal Government to use its powers and authority to uphold Federal Courts, the President’s responsibility is inescapable. In accordance with that responsibility, I have today issued an Executive Order directing the use of troops under Federal authority to aid in the execution of Federal law at Little Rock, Arkansas. This became necessary when my Proclamation of yesterday was not observed, and the obstruction of justice still continues.

It is important that the reasons for my action be understood by all our citizens. As you know, the Supreme Court of the United States has decided that separate public educational facilities for the races are inherently unequal and therefore compulsory school segregation laws are unconstitutional.

Our personal opinions about the decision have no bearing on the matter of enforcement; the responsibility and authority of the Supreme Court to interpret the Constitution are very clear. Local Federal Courts were instructed by the Supreme Court to issue such orders and decrees as might be necessary to achieve admission to public schools without regard to race—and with all deliberate speed.

During the past several years, many communities in our Southern States have instituted public school plans for gradual progress in the enrollment and attendance of school children of all races in order to bring themselves into compliance with the law of the land.
They thus demonstrated to the world that we are a nation in which laws, not men, are supreme.

I regret to say that this truth—the cornerstone of our liberties—was not observed in this instance.

It was my hope that this localized situation would be brought under control by city and State authorities. If the use of local police powers had been sufficient, our traditional method of leaving the problems in those hands would have been pursued. But when large gatherings of obstructionists made it impossible for the decrees of the Court to be carried out, both the law and the national interest demanded that the President take action.

Here is the sequence of events in the development of the Little Rock school case.

In May of 1955, the Little Rock School Board approved a moderate plan for the gradual desegregation of the public schools in that city. It provided that a start toward integration would be made at the present term in the high school, and that the plan would be in full operation by 1963. Here I might say that in a number of communities in Arkansas integration in the schools has already started and without violence of any kind. Now this Little Rock plan was challenged in the courts by some who believed that the period of time as proposed in the plan was too long.

The United States Court at Little Rock, which has supervisory responsibility under the law for the plan of desegregation in the public schools, dismissed the challenge, thus approving a gradual rather than an abrupt change from the existing system. The court found that the school board had acted in good faith in planning for a public school system free from racial discrimination.

Since that time, the court has on three separate occasions issued orders directing that the plan be carried out. All persons were instructed to refrain from interfering with the efforts of the school board to comply with the law.

Proper and sensible observance of the law then demanded the respectful obedience which the nation has a right to expect from all its people. This, unfortunately, has not been the case at Little Rock. Certain misguided persons, many of them imported into Little Rock by agitators, have insisted upon defying the law and have sought to bring it into disrepute. The orders of the court have thus been frustrated.

The very basis of our individual rights and freedoms rests upon the certainty that the President and the Executive Branch of Government will support and insure the carrying out of the decisions of the Federal Courts, even, when necessary with all the means at the President’s command.

Unless the President did so, anarchy would result.

There would be no security for any except that which each one of us could provide for himself.

The interest of the nation in the proper fulfillment of the law’s requirements cannot yield to opposition and demonstrations by some few persons.

Mob rule cannot be allowed to override the decisions of our courts.

Now, let me make it very clear that Federal troops are not being used to relieve local and state authorities of their primary duty to preserve the peace and order of the community. Nor are the troops there for the purpose of taking over the responsibility of the School Board and the other responsible local officials in running Central High School. The running of our school system and the maintenance of peace and order in each of our States are strictly local affairs and the Federal Government does not interfere except in a very few special cases and when requested by one of the several States. In the present case the troops are there, pursuant to law, solely for the purpose of preventing interference with the orders of the Court.

The proper use of the powers of the Executive Branch to enforce the orders of a Federal Court is limited to extraordinary and compelling circumstances. Manifestly, such an extreme situation has been created in Little Rock. This challenge must be met and with such measures as will preserve to the people as a whole their lawfully-protected rights in a climate permitting their free and fair exercise. The overwhelming majority of our people in every section of the country are united in their respect for observance of the law—even in those cases where they may disagree with that law.

They deplore the call of extremists to violence.

The decision of the Supreme Court concerning school integration, of course, affects the South more seriously than it does other sections of the country. In that region I have many warm friends, some of them in the city of Little Rock. I have deemed it a great personal privilege to spend in our Southland tours of duty while in the military service and enjoyable recreational periods since that time.

So from intimate personal knowledge, I know that the overwhelming majority of the people in the South—including those of Arkansas and of Little Rock—are of good will, united in their efforts to preserve and respect the law even when they disagree with it.
They do not sympathize with mob rule. They, like the rest of our nation, have proved in two great wars their readiness to sacrifice for America.

A foundation of our American way of life is our national respect for law.

At a time when we face grave situations abroad because of the hatred that Communism bears toward a system of government based on human rights, it would be difficult to exaggerate the harm that is being done to the prestige and influence, and indeed to the safety, of our nation and the world.

Our enemies are gloating over this incident and using it everywhere to misrepresent our whole nation. We are portrayed as a violator of those standards of conduct which the peoples of the world united to proclaim in the Charter of the United Nations. There they affirmed “faith in fundamental human rights” and “in the dignity and worth of the human person” and they did so “without distinction as to race, sex, language or religion.”

And so, with deep confidence, I call upon the citizens of the State of Arkansas to assist in bringing to an immediate end all interference with the law and its processes. If resistance to the Federal Court orders ceases at once, the further presence of Federal troops will be unnecessary and the City of Little Rock will return to its normal habits of peace and order and a blot upon the fair name and high honor of our nation in the world will be removed.

Thus will be restored the image of America and of all its parts as one nation, indivisible, with liberty and justice for all.

Good night, and thank you very much.