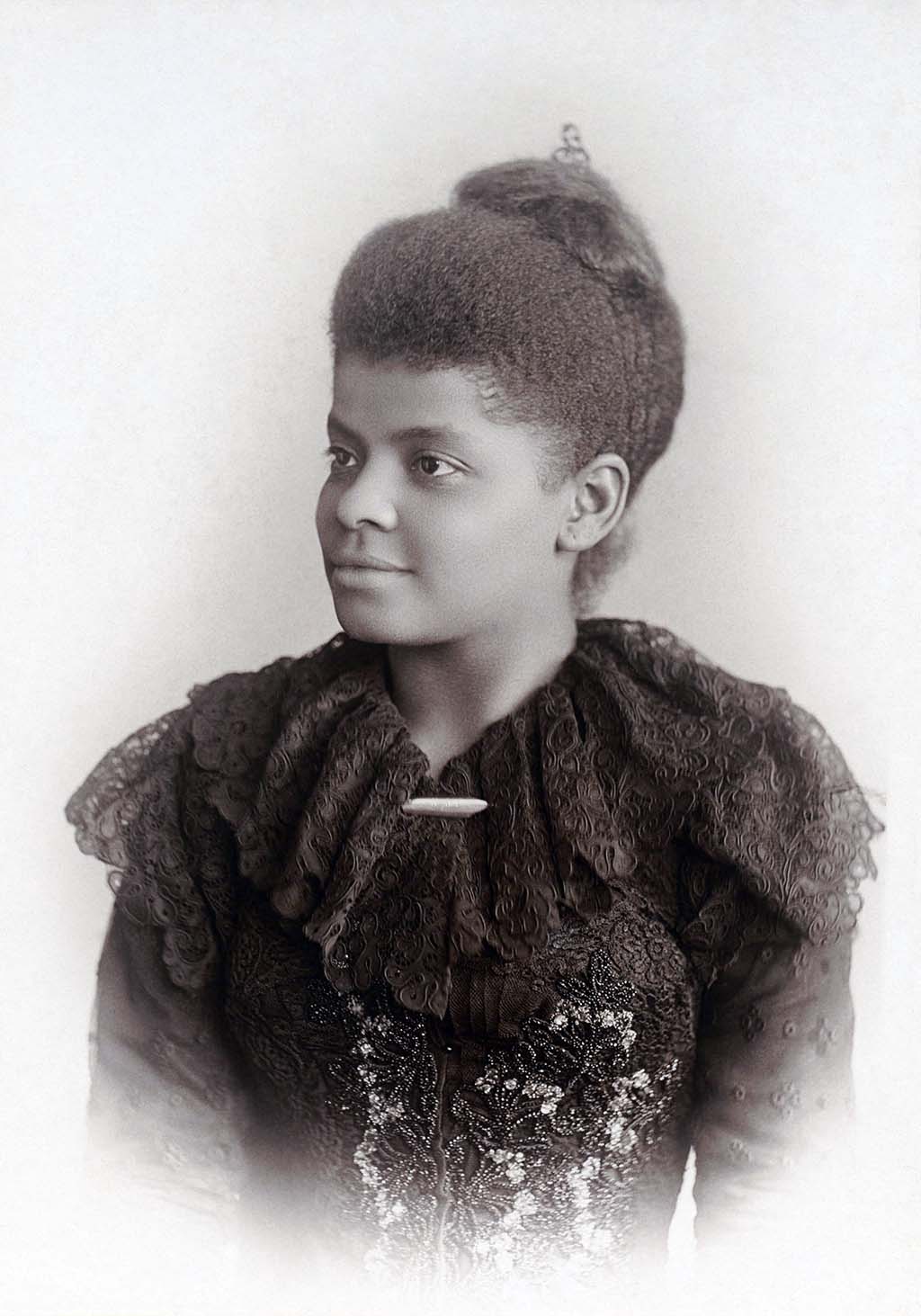 By 1909 Ida B. Wells was the most prominent anti-lynching campaigner in the United States.  From the early 1890s she labored mostly alone in her effort to raise the nation’s awareness and indignation about these usually unpunished murders.  In 1909, however, she gained a powerful ally in the newly formed National Association for the Advancement of Colored People (NAACP).  The following speech was delivered by Wells at the National Negro Conference, the forerunner to the NAACP, in New York City on May 31-June 1, 1909.

The lynching record for a quarter of a century merits the thoughtful study of the American people. It presents three salient facts: First, lynching is color-line murder. Second, crimes against women is the excuse, not the cause. Third, it is a national crime and requires a national remedy. Proof that lynching follows the color line is to be found in the statistics which have been kept for the past twenty-five years. During the few years preceding this period and while frontier law existed, the executions showed a majority of white victims. Later, however, as law courts and authorized judiciary extended into the far West, lynch law rapidly abated, and its white victims became few and far between.  Just as the lynch-law regime came to a close in the West, a new mob movement started in the South.

This was wholly political, its purpose being to suppress the colored vote by intimidation and murder. Thousands of assassins banded together under the name of Ku Klux Klans, “Midnight Raiders,” “Knights of the Golden Circle,” et cetera, et cetera, spread a reign of terror, by beating, shooting and killing colored in a few years, the purpose was accomplished, and the black vote was supressed. But mob murder continued. From 1882, in which year fifty-two were lynched, down to the present, lynching has been along the color line. Mob murder increased yearly until in 1892 more than two hundred victims were lynched and statistics show tht 3,284 men, women and children have been put to death in this quarter of a century. During the last ten years from 1899 to 1908 inclusive the number lynched was 959. Of this number 102 were white, while the colored victims numbered 857. No other nation, civilized or savage, burns its criminals; only under that Stars and Stripes is the human holocaust possible. Twenty-eight human beings burned at the stake, one of them a woman and two of them children, is the awful indictment against American civilization—the gruesome tribute which the nation pays to the color line.

Why is mob murder permitted by a Christian nation? What is the cause of this awful slaughter? This question is answered almost daily— always the same shameless falsehood that “Negroes are lynched to protect womanhood.” Standing before a Chautauqua assemblage, John Temple Graves, at once champion of lynching and apologist for lynchers, said: “The mob stands today as the most potential bulwark between the women of the South and such a carnival of crime as would infuriate the world and precipitate the annihilation of the Negro race.” This is the never-varying answer of lynchers and their apologists. All know that it is untrue. The cowardly lyncher revels in murder, then seeks to shield himself from public execration by claiming devotion to woman. But truth is mighty and the lynching record disc1oses the hypocrisy of the lyncher as well as his crime.

The Springfield, Illinois, mob rioted for two days, the militia of the entire state was called out, two men were lynched, hundreds of people driven from their homes, all because a white woman said a Negro assaulted her. A mad mob went to the jail, tried to lynch the victim of her charge and, not being able to find him, proceeded to pillage and burn the town and to lynch two innocent men. Later, after the police had found that the woman’s charge was false, she published a retraction, the indictment was dismissed and the intended victim discharged. But the lynched victims were dead. Hundreds were homeless and Illinois was disgraced.

Is there a remedy, or will the nation confess that it cannot protect its protectors at home as well as abroad? Various remedies have been suggested to abolish the lynching infamy, but year after year, the butchery of men, women and children continues in spite of plea and protest. Education is suggested as a preventive, but it is as grave a crime to murder an ignorant man as it is a scholar. True, few educated men have been lynched, but the hue and cry once started stops at no bounds, as was clearly shown by the lynchings in Atlanta, and in Springfield, Illinois.

Agitation, though helpful, will not alone stop the crime. Year after year statistics are published, meetings are held, resolutions are adopted and yet lynchings go on. Public sentiment does measurably decrease the sway of mob law, but the irresponsible bloodthirsty criminals who swept through the streets of Springfield, beating an inoffensive law-abiding citizen to death in one part of the town, and in another torturing and shooting to death a man who for threescore years had made a reputation for honesty; integrity and sobriety, had raised a family and had accumulated property; were not deterred from their heinous crimes by either education or agitation.

The only certain remedy is an appeal to law. Lawbreakers must be made to know that human life is sacred and that every citizen of this country is first a citizen of the United States and secondly a citizen of the state in which he belongs. This nation must assert itself and protect its federal citizenship at home as well as abroad. The strong arm of the government must reach across state lines whenever unbridled lawlessness defies state laws and must give to the individual under the Stars and Stripes the same measure of protection it gives to him when he travels in foreign lands.

Federal protection of American citizenship is the remedy for lynching. Foreigners are rarely lynched in America. If, by mistake, one is lynched, the national government quickly pays the damages. The recent agitation in California against the Japanese compelled this nation to recognize that federal power must yet assert itself to protect the nation from the treason of sovereign states. Thousands of American citizens have been put to death and no President has yet raised his hand in effective protest, but a simple insult to a native of Japan was quite sufficient to stir the government at Washington to prevent the threatened wrong. If the government has power to protect a foreigner from insult, certainly it has power to save a citizen’s life.

The practical remedy has been more than once suggested in Congress. Senator Gallinger, of New Hampshire, in a resolution introduced in Congress called for an investigation “with the view of ascertaining whether there is a remedy for lynching which Congress may apply.” The Senate Committee has under consideration a bill drawn by A. E. Pillsbury, formerly Attorney General of Massachusetts, providing for federal prosecution of lynchers in cases where the state fails to protect citizens or foreigners. Both of these resolutions indicate that the attention of the nation has been called to this phase of the lynching question.

As a final word, it would be a beginning in the right direction if this conference can see its way clear to establish a bureau for the investigation and publication of the details of every lynching, so that the public could know that an influential body of citizens has made it a duty to give the widest publicity to the facts in each case; that it will make an effort to secure expressions of opinion all over the country against lynching for the sake of the country’s fair name; and lastly, but by no means least, to try to influence the daily papers of the country to refuse to become accessory to mobs either before or after the fact.

Several of the greatest riots and most brutal burnt offerings of the mobs have been suggested and incited by the daily papers of the offending community. If the newspaper which suggests lynching in its accounts of an alleged crime, could be held legally as well as morally responsible for reporting that “threats of lynching were heard”; or, “it is feared that if the guilty one is caught, he will be lynched”; or, “there were cries of ‘lynch him,’ and the only reason the threat was not carried out was because no leader appeared,” a long step toward a remedy will have been taken.

In a multitude of counsel there is wisdom. Upon the grave question presented by the slaughter of innocent men, women and children there should be an honest, courageous conference of patriotic, law-abiding citizens anxious to punish crime promptly, impartially and by due process of law, also to make life, liberty and property secure against mob rule.

Time was when lynching appeared to be sectional, but now it is national—a blight upon our nation, mocking our laws and disgracing our Christianity. “With malice toward none but with charity for all” let us undertake the work of making the “law of the land” effective and supreme upon every foot of American soil—a shield to the innocent; and to the guilty, punishment swift and sure.