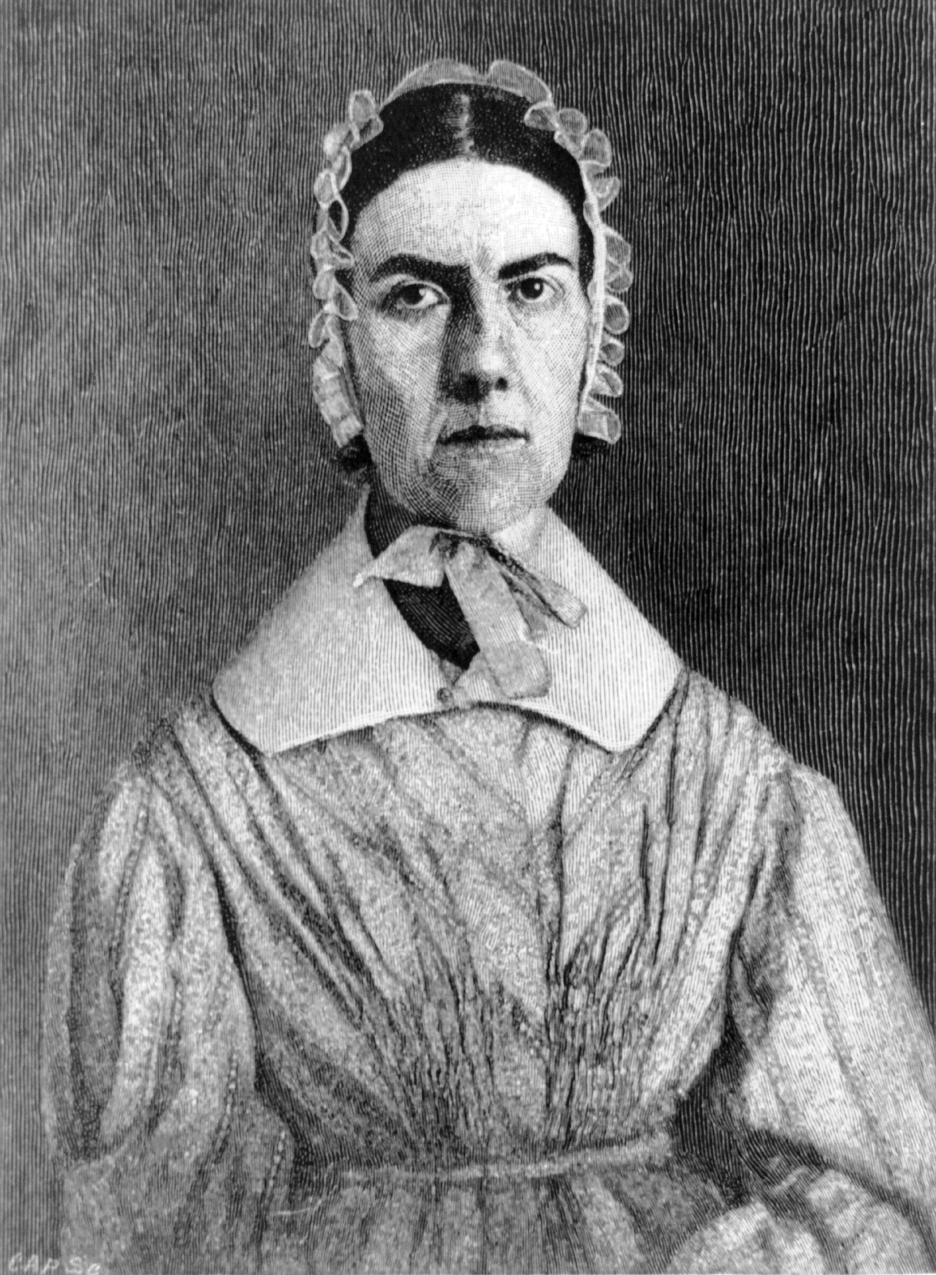 In February 1838, Angelina Grimke became the first woman in U.S. history to address the members of an American legislative body when she spoke to the members of the Massachusetts Legislature.  Her subject was the demand for the immediate end of the slave trade in Washington, D.C.  That speech appears below.

MR. CHAIRMAN–
More than 2,000 years have rolled their dark and bloody waters down the rocky, winding channel of time into the broad ocean of Eternity, since woman’s voice was heard in the palace of an eastern monarch and woman’s petition achieved the salvation of millions of her race from the edge of the sword. The Queen of Persia, if Queen she might be called, who was but the mistress of her voluptuous lord, trained as she had been in the secret abominations of an oriental harem, had studied too deeply the character of Ahasuerus not to know that the sympathies of his heart could not be reached except through the medium of his sensual appetites. Hence we find he; arrayed in royal apparel, and standing in the inner court of the King’s house, hoping by her personal charms to win the favor of her lord. And after the golden sceptre had been held out, and the inquiry was made, “What wilt thou, Queen Esther, and what is thy request? It shall be given thee to the half of the kingdom” -even then she dared not ask either for her own life, or that of her people. She felt that if her mission of mercy was to be successful, his animal propensities must be still more powerfully wrought upon-the luxurious feast must be prepared, the banquet of wine must be served up, and the favorable moment must be seized when, gorged with gluttony and intoxication, the king’s heart was fit to be operated upon by the pathetic appeal. “If I have found favor in thy sight, 0 King, and if it please the King, let my life be given at my petition, and my people at my request.” It was thus, through personal charms, and sensual gratification, and individual influence, that the Queen of Persia obtained the precious boon she craved-her own life, and the life of her beloved people. Mr. Chairman, it is my privilege to stand before you on a similar mission of life and love; but I thank God that we live in an age of the world too enlightened and too moral to admit of the adoption of the same means to obtain as holy an end. I feel that it would be an insult to this Committee, were I to attempt to win their favor by arraying my person in gold, and silver, and costly apparel, or by inviting them to partake of the luxurious feast, or the banquet of wine. I understand the spirit of the age too well to believe that you could be moved by such sensual means-means as unworthy of you, as they would be beneath the dignity of the cause of humanity. Yes, I feel that if you are reached at all, it will not be by me, but by the truths I shall endeavor to present to your understandings and your hearts. The heart of the eastern despot was reached through the lowest propensities of his animal nature; yours, I know, cannot be reached but through the loftier sentiments of the intellectual and moral feelings.

I stand before you as a citizen, on behalf of the 20,000 women of Massachusetts, whose names are enrolled on petitions which have been submitted to the Legislature of which you are the organ. These petitions relate to the great and solemn subject of American slavery-a subject fraught with the deepest interest to this republic, whether we regard it in its political, moral, or religious aspects. And because it is a political subject, it has often been tauntingly said, that woman has nothing to do with it. Are we aliens, because we are women? Are we bereft of citizenship, because we are the mothers, wives, and daughters of a mighty people? Have women no country-no interests staked in public weal-no liabilities in common peril-no partnership in a nation’s guilt and shame? Let the history of the world answer these queries. Read the denunciations of Jehovah against the follies and crimes of Israel’s daughters. Trace the influence of woman as a courtezan and a mistress in the destinies of nations, both ancient and modern, and see her wielding her power too often to debase and destroy, rather than to elevate and save. It is often said that women rule the world, through their influence over men. If so, then may we well hide our faces in the dust, and cover ourselves with sackcloth and ashes.

It has not been by moral power and intellectual, but through the baser passions of man. This domination of women must be resigned-the sooner the better; in the age which is approaching, she should be something more–she should be a citizen; and this title, which demands an increase of knowledge and of reflection, opens before her a new empire! I hold, Mr. Chairman, that American women have to do with this subject, not only because it is moral and religious, but because it is political, inasmuch as we are citizens of this republic, and as such our honor, happiness, and well being, are bound up in its politics and government and laws.

I stand before you as a southerner, exiled from the land of my birth, by the sound of the lash, and the pitious cry of the slave. I stand before you as a repentant slaveholder. I stand before you as a moral being, endowed with precious and inalienable rights, which are correlative with solemn duties and high responsibilities; and as a moral being I feel that owe it to the suffering slave, and to the deluded master, to my country and the world, to do all that I can to overturn a system of complicated crimes, built up upon the broken hearts and prostrate bodies of my countrymen in chains, and cemented by the blood and sweat and tears of my sisters in bonds ….