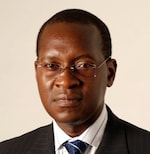 Governor Chilundo holds a Ph.D. degree from the University of Minnesota, USA (1995) in African Social and Economic History. He is Associate Professor in the History Department at Universidade Eduardo Mondlane (UEM). He has been lecturing since 1986, after his graduation with distinction from Charles University in the former Republic of Czechoslovakia.

His publications include books and articles on social and economic history as well as on land use and higher education issues.

On a part-time basis he chaired the Land Studies Unit, known in Portuguese, as Núcleo de Estudos de Terra e Desenvolvimento, between 1997 and 2006, which was responsible for research on land and environmental issues, including gender in rural areas. Funded initially by USAID, then by Ford and Kellogg Foundations, this Unit was responsible for recommending new land legislation and its dissemination throughout the country, for training many young Mozambicans in research leading to scientific essays for the completion of the first degrees, and for sending abroad students for their M.A. degrees. Later the Unit led the process that established the first M.A. degree in Mozambique in Rural Sociology and Development.