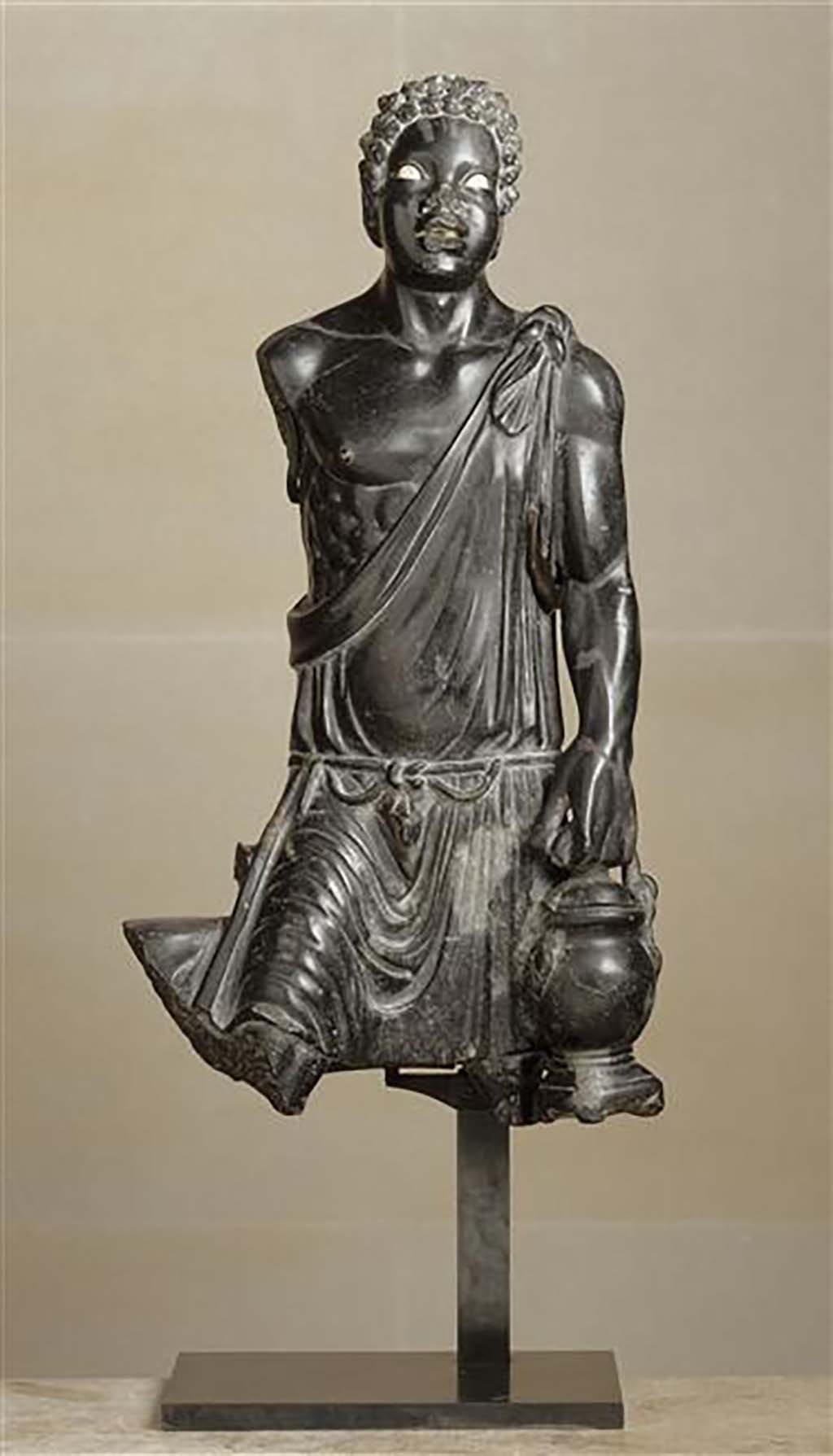 Most historians of the Roman world have decoupled the concepts of bondage and race that are central to the arguments justifying the enslavement of millions of people in the United States and other modern western nations. Instead they argued that those enslaved by the Romans had a rough equality regardless of their region of origin.  Historian Sandra Joshel, however, makes note of important distinctions  the Romans made among their bondspeople. Her argument appears below.

Those who sell slaves must state the natio [place of origin] of each at the sale; for the natio of a slave frequently encourages or deters a prospective buyer; hence it is advantageous to know his natio, since it is reasonable to suppose that some slaves are good because they originate from a tribe that has a good reputation, and others bad because they come from a tribe that is rather disreputable.
(Edict of the Aediles, Digest 21.1.31.21, trans. Alan Watson)

As the Roman law on the sale of slaves makes clear, the ancient Romans paid attention to the origin of the slaves whom they bought, sold, and used in their houses, farms, and businesses. The term, “origin,” in Latin is natio:  the Oxford Latin Dictionary tells its readers that natio can mean origin, people, nation, or race.  Which noun a translator chooses will connote particular meanings for readers of ancient Roman texts in the twenty-first century, especially in the context of slavery.  Although we acknowledge that slavery existed in places and cultures other than the southern United States, in particular Greco-Roman antiquity, popular historical imagination usually associates slavery with race—in particular with the millions of black Africans shipped to the Americas from the seventeenth century on.  In effect, slave is associated with black.  While the Romans had clear notions about non-Romans, other cultures, and even different body types and facial features, they lacked the notions of race that developed in Europe and the Americas from the fifteenth century to the present: that is, a notion that associates a particular set of characteristics (usually deeply discrediting for all but whites) with a skin  color and particular physiogamy.

This is not to say that the Romans never saw a black African or that some slaves in the Roman empire were black. Roman paintings and statuary, like a small statuette from the third century CE, which accompanies this article, depict men and women with African features.  Currently in the Louvre Museum in Paris, France this man is identified as a slave probably because he looks African. Yet, we cannot be sure that he, or any Roman depiction of an African, is a slave. Free Africans appeared in the Roman empire as traders, travelers, and workmen.  In this case, however, factors other than race may well indicate a slave: his simple tunic and the vessel he carries for some task.  Domestic servants, in fact, were most often slaves, and depictions of servants, dressed in simple tunics or in livery, most probably represent slaves.

Modern associations with race will not help us to understand the Roman view of slaves’ ethnicities, natal cultures, and origins.  The Romans did have negative ethnic stereotypes and they did denigrate slave bodies and supposed characteristics.  In many ways, the attitudes and stereotypes of freeborn (usually elite) Romans, reflect what the sociologist Orlando Patterson calls “social death”—the slave’s the loss of ethnicity, family, and membership in a tribe or a state.  At Rome, attitudes toward slaves and slaveholders’ practices denied the ethnicity of slaves even as they acknowledged it, and this simultaneous affirmation and denial contributed to the slave’s social death.

The Romans had various sources of slaves—war, birth, piracy, and the long distance trade from outside the empire.  Of these, war, the enslavement of Rome’s defeated enemies, was one of the most important.  The commanding general determined the fate of war captives, whom the Romans considered part of the plunder.  Usually, the general handed over the captives to an official who sold them at auction to traders who followed the armies.  Cicero’s behavior after a small victory during his governorship of Cilicia was typical.  He gave his soldiers all the plunder except the captives whom he sold on 19 December 51 BCE:  “as I write, there is about 120,000 sesterces on the platform.”  Cicero’s words mark out auction as a step in the commodification of the humans sold—a step toward social death.  Cicero did not even count the captives that he put up for sale; for him, they were not Cilicians—just 120,000 sesterces.

To use modern terms, the Romans were “equal opportunity” enslavers: they did not limit their enslavements to one people, place, or, in our terms, race.  From the late third century BCE through the early third century CE, as the Romans conquered the Mediterranean basin, the Balkans, much of the modern Middle East, Europe west of the Rhine River, they often enslaved at least some of their defeated enemies.  Although the numbers given in ancient sources are notoriously unreliable, a few examples indicate the scale of capture and enslavement.  In 177 BCE, during his campaign in Sardinia, Tiberius Sempronius Gracchus killed or enslaved 80,000 of the island’s inhabitants.  In 167 BCE the Roman senate granted the victorious Roman general in Greece the right to sack seventy cities on the west coast of Greece: 150,000 persons were enslaved. Although the nearly continuous wars of expansion of the last two BCE came to an end under imperial Rome, the empire still waged wars and enslaved many of the conquered.  To name a few, Augustus’s wars against the Alpine tribes and in Spain, Tiberius’s wars along the Rhine, Claudius’s conquest of Britain, campaigns against the Parthians, Trajan’s wars in Dacia, and Marcus Aurelius’ campaign across the Danube all brought captives to Rome as slaves.  Revolts in the provinces, though rarer, too, resulted in enslavements.  In the Jewish War (in what is now Israel) in 66-70 CE, to take a dramatic example, 97,000 people were enslaved.

The association between conquest and slavery shaped Roman perceptions of all slaves, regardless of their origin, as defeated outsiders. The jurist Florentinus (Digest 1.5.4.2-3) claims slaves were called servi because generals were accustomed to sell those captured in war (captivos), saving rather that killing them (servare), and mancipia because they were seized from the enemy by force (manu capiuntur). Thus, like war captives, children were born into slavery.  Moreover, men and women brought into the empire in the long-distance slave trade not only lost their natal cultures, they became outsiders, and their lack of power as bodies sold in the market likened them to the condition of defeated enemies who, like their goods, became plunder.

If all differences of ethnicity and origin were reduced to the category of defeated captive in the crucible of conquest, sale in the marketplace reinscribed natio not as a social, ethnic, or racial identity but as a set of personal characteristics.  The identification of origin prescribed by the Roman law on slave sales took place among—indeed belonged to–practices which reduced the human being to a commodity for sale and which from a Roman point of view deeply shamed the person who underwent them.  Penned up and readied for sale, slaves in Rome were fattened, painted, slathered with various concoctions, and dressed up or covered up to hide wounds and scars.  The slave climbed onto a platform called a catasta—the object of the piecing gazes of on-lookers and buyers.  A plaque with the relevant information on the slave (including origin) hung around his or her neck.  New captives had their feet chalked to mark their condition.  Some were made to leap around to demonstrate their health or agility.  Sometimes, the buyer would order the slave stripped, and he or the dealer would poke or prod the slave to check for defects or flaws.

The slave’s place of origin interested buyers as an index of character and behavior.  Imagine, for example, the author and writer of the late first century BCE, Marcus Terentius Varro, at the slave market near the Temple of Castor in Rome.  His manual on agriculture includes advice on the kinds of slaves fit for different tasks on the farm and suggest the standards that he, or a reader following his advice, applied in the slave market.  He would pay close attention to origin in his selecting slaves.  First, he would calculate the origins of the slaves that he already owned, so as not to buy too many from one place, because, according to Varro, too many slaves from the same place caused “domestic quarrels.”  Second, origin was a yardstick of potential.  If the buyer was in the market for herdsmen, he should choose Gauls and avoid Bastulans or Turdulians. If he wanted female slaves as mates for his herdsmen, he would do well to consider slaves from Illyricum, as these women were “strong and not ill-looking, in many places they are as fit for work as men.”

Cicero, Varro’s contemporary, indicates the importance of origin for other kinds of slaves.  Writing to his friend Atticus in November 55 BCE, he jokes about the potential captives from Caesar’s invasion of Britain:  “I think that you will not expect any of them to be learned in literature or music.” Cicero assumes a common Roman perception of Britons, so any buyer who went to market to buy a personal servant, secretary, or musician, would eliminate any Briton on the catasta.  Origin even entered the considerations of men in the market for a sexual favorite:  fantasizing about his ideal boy toy, the poet Martial chooses a boy from Egypt because of its reputation for sexual wantonness.

These judgments, of course, depended on stereotypes of character and physique and not reality.  Roman slaveholders paid attention to slaves’ ethnicity, origin, and even what we might see as race, yet, at the same time, they denied the lived reality of natio.  Their distinctions were based on a set of personal characteristics that indicated the slave’s potential use and acceptance of subjection.  Thus, even as the Roman slaveholders recognized ethnic and physical differences, they collapsed those differences to a single consideration that erased the lived realities of the former lives of the enslaved.  A Gaul lost his cultural identity as a member of this or that tribe to become a potential herdsman; the Briton was useless for anything but physical labor; the Egyptian boy was reduced to a single quality in the sexual ethnography of a Roman poet.