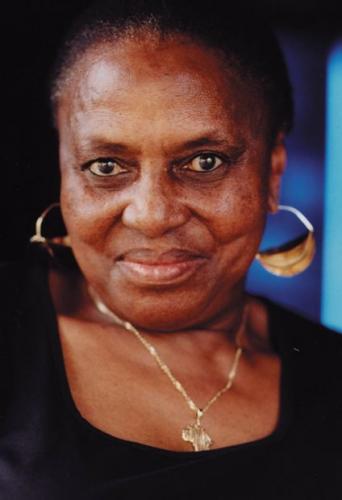 Zenzile Miriam Makeba, world renowned South African singer, was born in Johannesburg on March 4, 1932. She studied music for eight years at the Kilmerton Training Institute in Pretoria, South Africa and toured with amateur groups before beginning her professional career in 1954 with the Manhattan Brothers, a popular black South African musical group.

In the mid-1950s Makeba formed her own all-female ensemble called Skylarks. Mixing jazz with more traditional South African music, Makeba and the Skylarks performed songs that influenced the development of a new genre of music, African Jazz.  In 1959 Makeba performed in the South African musical King Kong.  There she met fellow performer Hugh Masekela who became her first husband.  Makeba also performed in a 1959 anti-Apartheid documentary, Come Back, Africa, which introduced her to an international audience. She obtained a South African government visa to attend the Venice Film Festival and used the opportunity to go into exile.  The South African government revoked her citizenship in 1963.

During that period Makeba traveled to London, UK where she met Harry Belafonte who in turn introduced her to audiences in the United States.  Makeba and Belafonte recorded together.  Their 1966 album, An Evening with Belafonte/Makeba, which focused on the political situation facing black South Africans, received a Grammy Award for Best Folk Recording.

In 1968 Makeba married former Student Non-Violent Coordinating Committee (SNCC) chairman Stokely Carmichael.  Her union with the controversial black power advocate caused controversy and her record deals and tours were cancelled.  Makeba and Carmichael left the United States and lived in Guinea.  Makeba and Carmichael separated in 1973 and she resumed her career, touring primarily in Africa, South America, and Europe.  She also served as the Guinean delegate to the United Nations where in 1986 she won the Dag Hammarskjold Peace Prize.  In 1987 Makeba joined Paul Simon in his Graceland tour which introduced her to newer, younger audiences.

In 1990 Nelson Mandela persuaded Makeba to return to South Africa.  She continued to perform worldwide however, appearing on U.S. and European T.V., and in movies while continuing to record music and tour.  Her 2000 album Homeland, for example, was nominated for a Grammy Award in the Best World Music category.

Miriam Makeba made a famous worldwide farewell concert tour in 2005, visiting all the nations where she had previously performed over the last half century.  She came out of retirement in 2008 to perform on behalf of Brazilian writer and activist Roberto Saviano.  Makeba had a heart attack on November 9, 2008, while performing on stage in Castel Volturno, Italy, and died the next day.