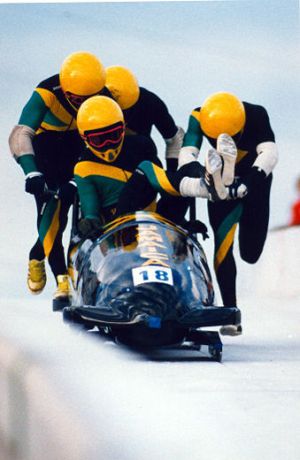 The Jamaica Bobsleigh Federation (JBF) was initially created in 1987 by two American businessmen living in Jamaica, George Fitch and William Maloney. After watching a local pushcart race, Fitch and Maloney recognized similarities with bobsledding. Already aware of Jamaica’s athletic history, particularly around sprinting and short distance running, which are vital in the sport of bobsleigh, Fitch and Maloney partnered with the President of the Jamaica Olympic Association, Michael Fennel, to build a world class bobsleigh program from scratch.

In spite of the potential opportunity to someday reach the Olympics, initial efforts at recruiting athletes to participate were unsuccessful. The solution turned out to be the Jamaican Army, where “volunteers” were more easily found. Through this method Dudley Stokes, Devon Harris, and Michael White were the first to join. By October 1987 further recruitment efforts had added Freddie Powell, Clayton Solomon, and Caswell Allen, rounding out the team.

In a country that had never sent an athlete to any Winter Olympics, training options for a bobsleigh team in Jamaica were limited. With financial support from George Fitch, who was the first President of the Jamaica Bobsleigh Federation, and the Jamaica Tourist Board, the team trained in Lake Placid, New York and Igls, Austria. Because of his experience as a helicopter pilot, Dudley Stokes was chosen as driver. With meager resources and inferior equipment, training was extremely difficult. These problems were mitigated somewhat by the hiring of coaches from the United States and the addition of veteran Austrian coach Sepp Haidacher.

As training continued and the XVth Winter Olympic Games in Calgary, Canada approached, North American media began to take notice. Despite the mocking tone of the media and a frosty reception by Federation International de Bobsleigh et de Tobogganing (FIBT), Jamaica successfully qualified both 2-man and 4-man teams for the Calgary Games.

By the time the Calgary Olympics began on February 13, 1988 the popularity of the team had grown significantly. Freddie Powell, a dreadlocked reggae singer, became the team’s unofficial spokesman. As the competition began Dudley Stokes was selected as driver and Michael White appointed brakeman for the 2-man event. Jamaica placed 35th in that international competition.

One of the pushers on the 4-man team was injured during training and was replaced by Chris Stokes, the brother of team captain Dudley Stokes. Chris Stokes, an accomplished sprinter was also in training for the upcoming Summer Olympics in Seoul, South Korea. He had no bobsleigh experience but because of his speed he was able to reduce the team’s start times. On the second day of the 4-man competition Dudley Stokes lost control of the sled coming out of a turn at 85 miles per hour, ending the fairy tale run with a spectacular crash and last place finish.

Jamaica subsequently entered teams at the 1992 Winter Olympics in Albertville, France and in the 1994 Games in Lillehammer, Norway, where its 4-man team finished in 14th place ahead of teams from the U.S., Russia, France, and Canada. The story and accomplishments of the 1988 Jamaica Olympic Bobsleigh Team were chronicled in the 1993 Disney movie Cool Runnings. Ending a twelve year absence, a Jamaican bobsleigh team will compete in the 2014 Winter Olympics in Sochi, Russia.