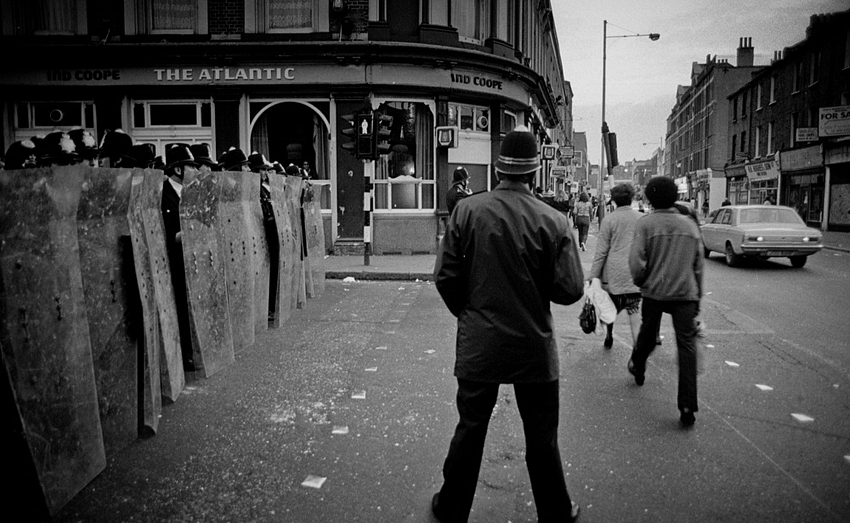 The Brixton Riots of April 10-12, 1981, described as the first serious riots of the 20th century in England, were the first large scale racial confrontations between black British youth and white British police.  The rioting was sparked by antagonism between black youths and the police.

Since World War Two, the area of Brixton, situated in the borough of Lambeth, London, England and heavily populated by West Indian and East Indian immigrants, had been in decline; in 1981 a third of the housing in Lambeth was of a poor standard and the unemployment rate was high. Sixty-five percent of the unemployed were black. A police operation to address the crime rate in Brixton, one of the highest in London, resulted in a significant number of black youths being stopped and searched.  During the five days in early April leading up to the riots there were 943 stop and searches in Brixton infuriating the local population and creating tensions between white police officers and youths.

On Friday April 10, 1981, two police officers were attempting to help an injured young black man in their car when a group of group of young black men, misinterpreting the officers’ actions as harassment, attacked the vehicle. The crowd of youths grew larger and more hostile, throwing bottles through police vehicles’ windscreens.  The incident seemingly ended when police reinforcements arrived. The build-up of police patrols in the area continued through the rest of the night and by Saturday afternoon, there were no less the 84 police officers patrolling the streets of Brixton, as well as three police vans driving round the area.  The heavy police presence heightened tensions in the area.

At 4:45pm on Saturday, April 11, two police officers searched and arrested a young black taxi driver, taking him away.  Missiles were thrown at the police van as it left. This led to more police reinforcements and led to the worst day of the rioting.  The rioters were mostly young black men but they were now joined by young whites.  Looting began, police vans were overturned and bricks, bottles, and petrol bombs were thrown, setting fire to both police and private cars. There were also a number of attacks on retail and commercial premises and bars.

On both Friday and Saturday, the police deployed dogs to quell the rioters. During nearly six hours of violence, 82 people were arrested, 279 police officers and at least 45 members of the public were injured, 61 private vehicles and 56 police vehicles were damaged or destroyed and 145 businesses were damaged, 28 of them by fire.

Sunday brought further disturbances, although the attacks on the police were generally less intense. One hundred sixty five people were arrested, 122 police officers and three members of the public were reported injured, and 61 police vehicles and 26 other vehicles were damaged or destroyed. Overall, 7,000 police officers had been involved in quelling the disturbances arresting a total of 282 people, most of whom were black.

Following the riots, the British government announced an inquiry into the disturbances led by Lord Leslie George Scarman.  Lord Scarman’s report, issued on November 25, 1981, placed the Brixton riots into the context of racial disadvantage faced by young blacks. It also blamed the police for escalating the tensions and called on law enforcement agencies to in the future consult and cooperate with the Brixton community.