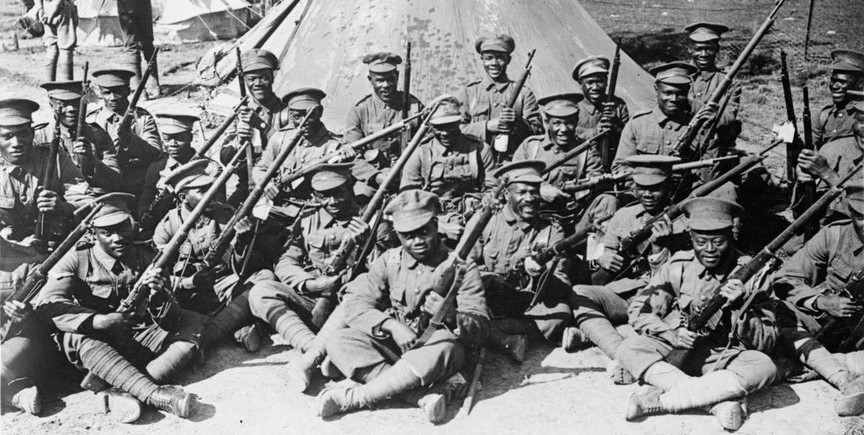 On August 4, 1914, Britain joined the Great War. The First World War, 1914-1918, is usually viewed as a predominantly white European conflict. In fact, many Africans, Asians, black Britons, and Caribbeans fought for the British Empire. At the beginning of the war, the British War Office, however, was reluctant to allow blacks to enlist in the British Army, fearing it would create racial tension in the ranks.

By early 1915, the British Colonial Office and War Office, despite their differences on allowing blacks into the British Army, agreed that Britain needed reinforcement from the colonies. With the support of King George V, in April 1915, a West Indian contingent was formed from colonial volunteers who had enlisted.

On October 26, 1915, the British West Indian Regiment (BWIR) was established and made official with Army Order Number Four in 1916. The BWIR was created as a separate unit within the British Army. The regiment mainly attracted men from the Caribbean, particularly from Jamaica. Men from the continent of Africa, from India, and black Britons, who were eager to support “the mother country“ but refused entry into white units of the British Army because of their race, also joined the BWIR. Although the BWIR had 12 battalions, all commanding officers in the regiment were required to be white, and blacks and other men of color did not rise above the rank of sergeant. Nonetheless, by November 1918, the BWIR had recruited over 15,000 men.

By the time the regiment was sent to the front lines in March 1916, the British Army was already engaged in war in Africa, Europe, and the Mediterranean.  Black soldiers were rarely given combat assignments, but when given the opportunity to fight, they performed as well as white soldiers. Many of their victories, however, were either downplayed or claimed by white commanding officers and soldiers.

Between 1916 and 1917, soldiers of the BWIR was stationed in France, Egypt, Belgium, West Africa, South Africa, and the Middle East. They spent most of their time during the war doing labor-intensive work such as digging trenches and laying telephone wires. Because of this, unarmed BWIR soldiers were consistently in the line of fire and suffered numerous casualties. The BWIR finally saw combat in Egypt and Palestine in 1917. In September 1918, the 1st and 2nd battalions were instrumental in defeating the Turkish position on the Bahr Ridge in the Jordan Valley.

When World War I ended with the Armistice of November 11, 1918, many demobilized BWIR soldiers returned to the Caribbean, where their presence was met with ambivalence unlike returning white soldiers in Britain. Demobbed BWIR soldiers, however, later led political and independence movements in Jamaica and other colonies.

Although most World War I BWIR service records were destroyed in an air raid during the Second World War, some BWIR soldiers were eventually recognized as war heroes and bestowed military medals.  Two were given the Member of the British Empire (MBE) medals. On June 22, 2017, the African and Caribbean War Memorial was unveiled on Windrush Square in the Brixton section of London to memorialize the African and Caribbean men who fought and the women who volunteered to defend the British Empire.