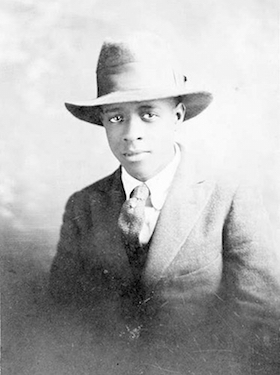 Wallace Thurman was born in Salt Lake City, Utah on August 16, 1902 to Beulah and Oscar Thurman.  He was reared by his maternal grandmother, Emma Jackson, who was among the founders of Calvary Baptist Missionary Church—the first black church in Utah.  Young Thurman lived for a time in Boise, Idaho, Chicago, Illinois, and Omaha, Nebraska before returning to Salt Lake City when he was 12.  Despite his family’s residence in a state politically and culturally dominated by the Church of Latter Day Saints (Mormon), Thurman was recognized for his brilliance at West High School and the University of Utah, where he was a pre-med major. In 1922, he transferred to the University of Southern California to study journalism but dropped out without receiving a degree.   While in Los Angeles he worked at the post office where he met aspiring novelist Arna Bontemps. Thurman and Bontemps worked together on The Pacific Defender, a black newspaper, and they started an artistic journal, Outlet.

Relocating to Harlem in 1925, in part as a result of his friendship with Bontemps, Thurman founded a second magazine, The Looking Glass, and became managing editor of The Messenger, the journal of Harlem’s radical Socialists led by Asa Philip Randolph.  Thurman also worked as a ghost writer for the magazine True Story.  In 1928 Thurman became the first black reader at Macaulay, a major New York publishing company.

Thurman’s writings soon propelled him into the vanguard of the “New Negro Renaissance.” Together with Aaron Douglass, Bruce Nugent, Zora Neale Hurston, and Langston Hughes, Wallace in 1926 founded his third journal: Fire!! Devoted to the Younger Negro Artists.  Langston Hughes, Aaron Douglas, Zora Neale Hurston, Richard Bruce Nugent, and Gwendolyn B. Bennett were among the first contributors to Fire!!  For many critics of the period, Fire!!, not Alain Locke’s edited anthology, The New Negro (1925), launched the Harlem Renaissance.

Wallace Thurman published three novels: The Blacker the Berry: A Novel of Negro Life (1929), which explores intra-racial conflicts related to skin color; Infants of the Spring (1932), which satirizes the Harlem Renaissance and its leading artists; and The Interne (1932), co-authored with A.L. Furman. His play, “Harlem: A Melodrama of Negro Life in Harlem” (written in collaboration with William Jourdan Rapp), reached Broadway in 1929 to mixed reviews.

Nonetheless by the early 1930s Wallace Thurman was acknowledged as one of the leading novelists, critics, poets, and playwrights of the Harlem Renaissance although he, in his own works, questioned and debunked its existence.  Wallace Thurman died in New York City on December 22, 1934.  By the time of his death at the young age of 32 from tuberculosis, Thurman had established himself as a pioneer and literary revolutionary who left an enviable written record as a legacy.