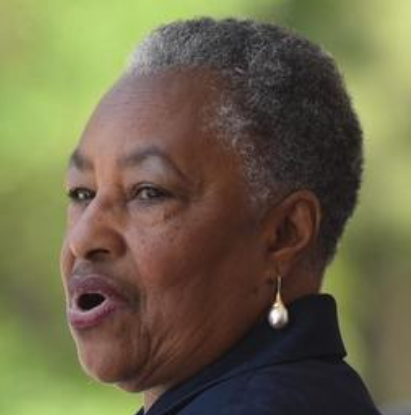 On October 1, 2001, President George W. Bush nominated Mattie R. Sharpless to be the next United States Ambassador to the Central African Republic. After confirmation by the U.S. Senate, Sharpless was at her post in the nation’s capital at Bangui by mid-December 2001.  Sharpless served in Bangui until June 2003.  Unlike most ambassadors who are either political appointees or career foreign service diplomats, Sharpless was a long term employee of the United States Foreign Agriculture Service, a section of the U.S. Department of Agriculture (USDA).

Sharpless was born in Hampstead, North Carolina on July 1, 1943 to James and Lecola Sharpless.  When Sharpless was 11, her father died. Her mother Lecola became a single parent and the sole provider for Mattie and her eight siblings.

Because of the family’s poverty, Mattie Sharpless at first believed that her own educational advancement would be difficult. With the support of family and teachers she eventually decided to pursue higher education.  Sharpless graduated from Pender County Training High School in Rocky Mount, North Carolina in 1961 and then entered North Carolina College (NCC), a historically black college in Durham, North Carolina, on a scholarship. While at NCC she became interested in pursuing a career with the Federal government.

In 1965, Sharpless graduated from NCC with a Bachelor of Science degree in Business Education. She continued to pursue graduate work at the institution part time and was there when it became North Carolina Central University in 1969.  In 1972 she graduated from North Carolina Central University with an M.A. in Business Administration and Economics.

In 1965, after obtaining her B.S. degree, Sharpless began working for the United States Foreign Agriculture Service (USFAS), the agency in the USDA that connects American farming with other areas of the world; it seeks to further trade possibilities globally so there is more foodstuff security. Sharpless served over 40 years with USFAS within the USDA, often in other nations.  She also held various positions in the Foreign Agricultural Service including Agricultural Attaché, and Agricultural Counselor.

In 1999-2001, for example, before her appointment as U.S. Ambassador, Sharpless was the Special Envoy to Emerging Economies for USFAS.  In that capacity she led the effort to encourage increased American purchases of African cash crops such as coffee, cocoa, and tobacco.  Sharpless and a growing number of government officials and leaders of non-government organizations (NGOs) working in Africa believe that increased trade with the U.S. and the rest of the world would generate more long-term benefits for these young nations than additional foreign aid. Sharpless continued that focus when she served as U.S. Ambassador to the Central African Republic.

Sharpless’ accolades are impressive. She has received multiple honors for her work, such as the Presidential Meritorious Service Award, the Woman of the Year Award from the Foreign Agricultural Service, and the Superior Honor Award from the USDA. In the same year Sharpless became U.S. Ambassador (2001), President Bush bestowed upon her the Presidential Distinguished Service Award. After her retirement from the USDA in 2003, Sharpless continued to be active in multiple community projects most of which assist young people pursuing education or career opportunities in government or the non-profit sector.