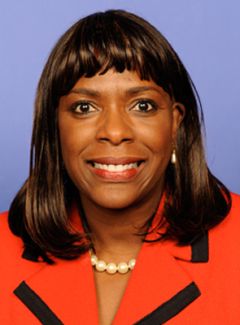 Terrycina “Terri” Sewell, the current U.S. Representative for Alabama’s 7th district, was born January 1, 1965 in Huntsville, Alabama to Andrew and Nancy Sewell. Sewell grew up in Selma, Alabama where both of her parents were employed by the local school district. Her father, Andrew, was a high school math teacher and football coach, and her mother, Nancy, a librarian. Nancy Gardner Sewell was also the first black woman elected to the Selma city council.

Sewell, who graduated from Selma High School in 1983, was the first black valedictorian in the school’s history.  She was also the first graduate of Selma High School to attend an Ivy League school.  After graduation Sewell attended Princeton University where she studied political science and graduated cum laude in 1986. While at Princeton Sewell wrote an award winning thesis titled “Black Women in Politics: Our Time Has Come,” for which she interviewed former Rep. Shirley Chisholm, the first African American congresswoman. Upon graduation Sewell was awarded the Marshall/Commonwealth Scholarship to study political science at Oxford University in England. Sewell received her Master’s degree from Oxford in 1988 with first-class honors. In 1992 Sewell graduated from the Harvard Law School. During her time at Harvard, she worked as the editor of the Civil Rights Civil Liberties Law Review.

After her graduation from Harvard Law School, Sewell returned to Alabama to work as a judicial law clerk for Judge U.W. Clemon of the U.S. District Court for the Northern District of Alabama.  Shortly after, Sewell began her legal career working as a securities lawyer at the firm of Davis, Polk and Wardwell in New York City. In 2004 Sewell again returned to Alabama where she became a partner at the law offices of Maynard, Cooper & Gale, P.C. in Birmingham.  Taking that post made her at the time the only black finance lawyer in Alabama. During her time with Maynard and Cooper, Sewell focused her efforts on helping historically black colleges restructure their debt.

On November 7, 2010 Sewell was elected to Congress with a 72% majority of the district’s vote. Congresswoman Sewell serves the 7th district, often called the “Black Belt of Alabama,” because it stretches from Birmingham south to include Tuscaloosa and her hometown of Selma.  She is one of the first women elected to Congress from Alabama and the first black woman to represent her state.