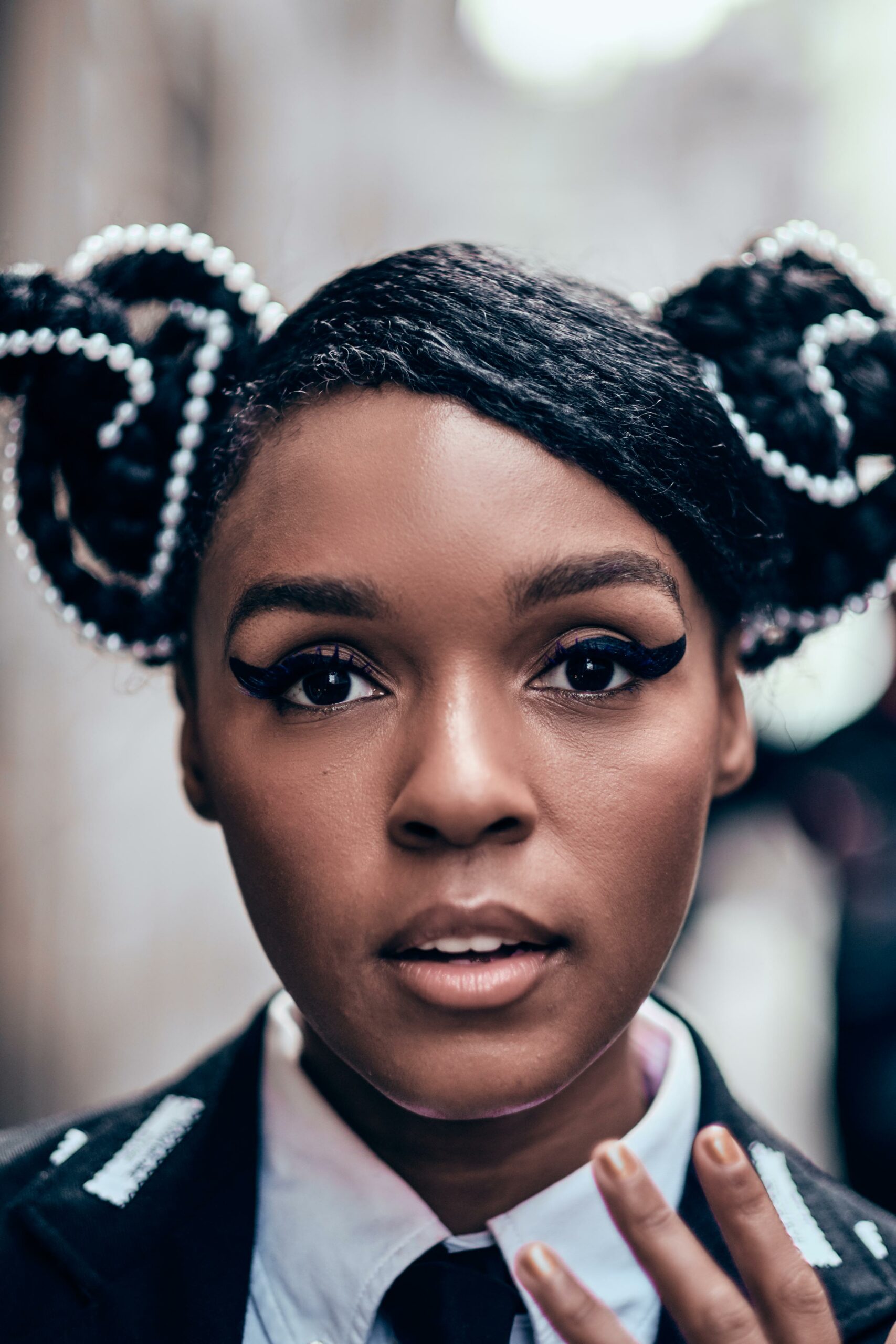 Janelle Monae Robinson, known professionally as Janelle Monae, is an African American singer, songwriter, actress, and model. Born on December 1, 1985, in Kansas City, Kansas, she is the daughter of a woman (whose name is unknown) who worked as a janitor, and Michael Robinson Summers, a truck driver. At a young age, Monae sang at a local Baptist church and appeared in local productions of such musicals as The Wiz and Cinderella. She also joined the Kansas City Coterie Theater Young Playwrights Round Table and wrote several full-length plays and musicals. One play told a story of a boy and girl who compete for a love of a plant, an idea inspired by Stevie Wonder’s 1979 album Journey through the Secret Life of Plants.

Monae attended F.L. Schlagle High School in Kansas City, Kansas. After graduating from high school, she received a scholarship to study musical theater at the American Musical and Dramatic Academy in New York City where she was the only black woman in her class. After leaving the academy, Monae moved to Atlanta, Georgia, where she worked at Office Depot. She self-produced a demo CD entitled Janelle Monae: The Audition and toured local colleges where she promoted her music and performed. On one tour, Monae met Chuck Lighting and Nate Wonder, two established and promising songwriters. The trio founded the Wondaland Arts Society record label in 2001 when Monae was sixteen.

Monae’s big break came in 2005 when, at the age of twenty, she performed Roberta Flack’s “Killing Me Softly with His Song” at an open mic night. Rapper Big Boi, of the hip-hop duo, OutKast, was in the audience watching. Big Boi was so impressed that he later featured Monae on two of his music tracks with his group Purple Ribbon All-Stars. In 2006 Outkast featured Monae on two more songs, “Call the Law” and “In Your Dreams,” from the album Idlewild. After Idlewild’s success, Monae released her 2007 EP (extended play) entitled Metropolis: Suite I (The Chase). The EP attracted the attention of songwriter and producer Sean Puffy Combs who signed her to his Bad Boy Records label. Monae’s EP Metropolis: Suite I (The Chase) eventually reached No. 115 on the Billboard Album charts, and its lead single, “Many Moons,” received a Grammy nomination for Best Urban/ Alternative Performance.

In 2010 Monae released her first full-length album, The ArchAndroid, which peaked at No. 17 on the Billboard U.S. album chart and featured the singles “Cold War” and “Tightrope.” The ArchAndroid earned her another Grammy nomination for Best Contemporary R&B Album. In 2013 Monae released her second album, The Electric Lady, which peaked at No. 5 on the Billboard Top 200. That same year, she was given Billboard’s Rising Star Award at the 2013 Billboard Music event. In February 2015, her label, Wondaland Arts Society, announced a joint venture with L. A. Reid’s Epic Records to promote her artists, Jidenna, Roman, St. Beauty, Deep Cotton, and Monae herself.

In 2016 Monae made her acting debut in the critically acclaimed drama Moonlight.  She also starred as Mary Winston-Jackson in the 2016 biopic Hidden Figures, which features Taraji P. Henson and Octavia Spencer. The film focused on three African-American women at NASA in the 1960s who calculated flight trajectories for Project Mercury and the Apollo 11. Hidden Figures opened in American theaters as a commercial success as well as to widespread critical acclaim.