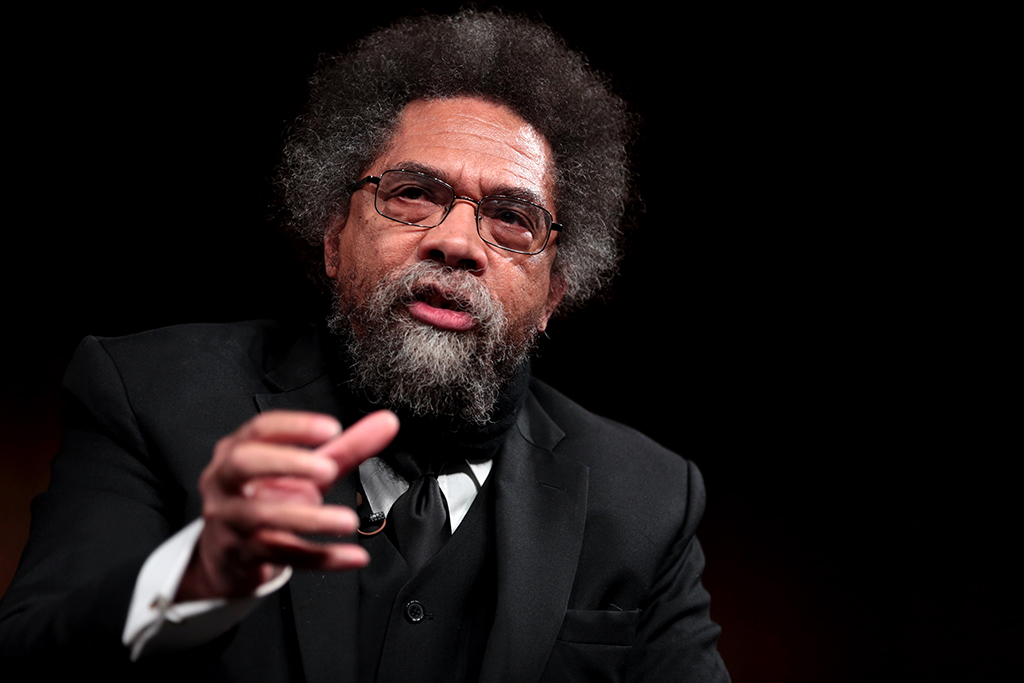 Cornel West is one of the most recognizable and preeminent intellectuals of his generation.  West has authored 19 books and edited another 13.  He is best known for his book Race Matters (1994) and in his role as a public intellectual.  West graduated Magna Cum Laude from Harvard in Massachusetts with an A.B., Near Eastern Languages and Civilization, (1973) and obtained his M.A. (1975) and Ph.D. in Philosophy (1980) at Princeton in New Jersey.  West has received more than 20 honorary degrees and an American Book Award. Professor West is currently the Professor of Philosophy and Christian Practice at Union Theological Seminary of New York City, New York.

Cornel Ronald West was born on July 2, 1953 in Tulsa, Oklahoma.  The West family moved to Sacramento, California in 1958.  West’s father, Clifton L. West, Jr., graduated from Washburn University in Topeka, Kansas and worked as a civil servant.   His mother, Irene West, an elementary school teacher and principal, was so admired that the City of Sacramento named the Irene B. West Elementary School in her honor.

West’s first marriage in 1977 was to Hilda Holloman and together they have one son, Clifton Louis (b. 1977). His second marriage, in 1981, was to Romona Santiago but it also ended in divorce. He is currently married to Elleni Gebre Amlak. West has a daughter, Zeytun (b. 2001) who lives in Bonn, Germany.

West’s early mentors were Harvard Professor emeritus Martin Kilson, the first African American to achieve a Professorship in Harvard College, and scholar St. Clair Drake.  West’s acknowledged intellectual influences span from Malcolm X to the black radical theologian James H. Cone to the music of James Brown and John Coltrane. West’s contribution to the field of philosophy is grounded in the African American Baptist church, pragmatism, transcendentalism and Marxism. West, a “non-Marxist socialist” is a member of the Democratic Socialists of America and has served as an honorary Chair.

West’s teaching career began at Union Theological Seminary of New York where he accepted a position before earning his doctorate. West taught at a number of institutions since then including Yale (Connecticut), the University of Paris (France), Princeton, and Harvard Universities. West left Harvard for Princeton in late 2001 following a widely reported academic dispute with then Harvard President Lawrence Summers. West left Princeton in 2012 and returned to Union Theological Seminary.  West is a member of Alpha Phi Alpha Fraternity.

Best known for his work Race Matters (1994), a highly acclaimed New York Times Bestseller, West argued that unregulated capitalism was “killing the souls and minds, and bodies of some black folk.” His work Democracy Matters: Winning the Fight Against Imperialism (2004) garnered wide attention as well.  West has made a number of appearances in movies including the Matrix Reloaded and The Matrix Revolutions and documentaries such as the 2008 film Examined Life.  He has also released three hip-hop/soul/spoken word albums, Sketches of My Culture (2001), Street Knowledge (2004), and Cornel West & BMWMB (Black Men Who Mean Business) in 2007. In 2010, he completed a series of recordings with the hip-hop band the Cornel West Theory.

West publicly supported Barack Obama’s 2008 presidential candidacy.  In 2009, however, West criticized President Obama when he was awarded the Nobel Peace Prize, saying that it would be difficult for him [Obama] to be “a war president with a peace prize.” In 2011 and 2012 West made additional comments that indicated he had completely retracted his support from President Obama. In 2011, West participated in a “Poverty Tour” with radio personality Tavis Smiley, and, in conjunction with his teaching, he co-hosted the program Smiley & West on the Public Radio International.