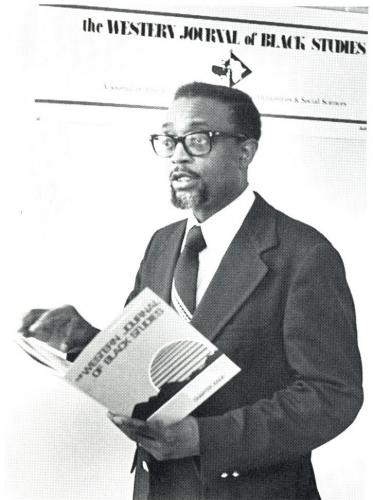 Talmadge Anderson, educator and activist scholar, was born in Hazlehurst, Georgia on July 22, 1932 to Viola Lee Baker Anderson and raised in Dublin, Georgia.  He attended the all black Telfair Street Elementary School and Washington Street High School.  In 1953 he earned a BA in Business Administration from Savannah State College. After graduating, he joined the Army and served as a supply specialist for three years.  He then earned an MBA from Atlanta University in 1958.  During the late 1950s and 1960s, Anderson held various teaching positions at St. Augustine’s College, Allen University, West Virginia Institute of Technology, and Lincoln University.

Anderson came to Washington State University in 1970 to serve as the Director of Black Studies and a faculty member in the College of Business Administration and Economics.  During his tenure as director, he developed the broadest interdisciplinary program in Black Studies the Pacific Northwest.  Hundreds of students either majored or minored in the field of Black Studies while he was director.  His program was the first in the region to offer classes like Swahili, Introduction to Black America, Black Literature in America, Black Psychology, Black Politics, Black Sociology, and his signature course, Black Economics.

Anderson is also recognized as a leading Black Studies scholar, editing, authoring, and co-authoring numerous books and articles.  In 1977, he founded and served as the first editor of the Western Journal of Black Studies, an interdisciplinary quarterly that focused on research, social and political analysis, literary criticism, and contemporary arts related to African and African American communities.  The journal quickly became one of the premier scholarly publications in the field.  He also authored two highly regarded survey texts on Black Studies titled Black Studies: Theory, Methods and Cultural Perspectives and Introduction to African American Studies: Transdisciplinary Approaches and Implications.