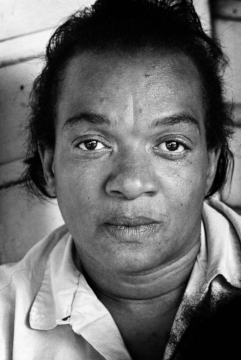 Shortly after her son, James Chaney was murdered in Mississippi in the summer of 1964 along with Andrew Goodman and Michael Schwerner, Fannie Lee Chaney gave an address in which she vowed to continue the struggle for racial justice in her home state.  She also announced that 12 year old Ben Chaney, already a civil rights activist who had been jail, would take his deceased brother’s place in the movement.  Her speech, originally published in Freedomways in 1965, appears below.

I am here to tell you about Meridian, Mississippi. That’s my home. I have been there all of my days. I know the white man; I know the black man. The white man is not for the black man we are just there. Everything to be done, to be said, the white man is going to do it; he is going to say it, right or wrong. We hadn’t, from the time that I know of, been able to vote or register in Meridian. Now, since the civil rights workers have been down in Mississippi working, they have allowed a lot of them to go to register. A lot of our people are scared, afraid. They are still backward. “I can’t do that; I never have,” they claimed. “I have been here too long. I will lose my job; I won’t have any job.” So, that is just the way it is. My son, James, when he went out with the civil rights workers around the first of ’64 felt it was something he wanted to do, and he enjoyed working in the civil rights Movement. He stayed in Canton, Mississippi, working on voter registration from February, through March. When he came home he told me how he worked and lived those few weeks he was there; he said, “Mother, one half of the time, I was out behind houses or churches waiting to get the opportunity to talk to people about what they needed and what they ought to do.” He said, “Sometime they shunned me off and some would say ‘I want you all to stay away from here and leave me alone.'” But he would pick his chance and go back again. That what I say about Mississippi right now. There is one more test I want to do there. I am working with the civil rights Movement, my whole family is, and my son, Ben, here, he is going to take his big brother’s place.

He has been working for civil rights. Everything he can do, he does it. For his activities, he had been jailed twice before he was 12 years old. He told me when he was in jail he wasn’t excited. He is not afraid; he would go to jail again! I am too, because we need and we’ve got to go to jail and we’ve got to get where the white man is.  The white man has got Mississippi and we are just there working for the white man. He is the one getting rich. And when he gets rich, we can be outdoors or in old houses and he is going to knock on the door and get his rent money.

This is not something that has just now started, it has been going on before my time and I imagine before my parents’ time. It is not just now the white man is doing this; it was borne from generation to generation. So, as I say, Ben is going to take his big brother’s place, and I am with him and the rest of the family also.  You all read about Mississippi all parts of Mississippi, but I just wish it was so you could just come down there and be able to see; just try to live there just for one day, and you will know just how it is there.