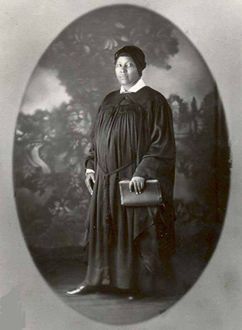 Ida Bell Robinson grew up in Pensacola, Florida, the seventh of twelve children born to Robert and Annie Bell. After her conversion as a teenager at an evangelistic street meeting, she led prayer services in homes. In 1909 she married Oliver Robinson, and they soon relocated to Philadelphia for better employment opportunities. She did street evangelism in Philadelphia under the auspices of The United Holy Church of America. In 1919, the church ordained her and appointed her to a small mission church, where she was successful in pastoral ministry and itinerant evangelism. Nevertheless, she increasingly felt that prospects for women within the denomination were dwindling. After a period of fasting and prayer, she believed that God was calling her to “Come out on Mount Sinai,” so that “I will use you to loose the women.”

Immediately, she established a charter for a new denomination, The Mount Sinai Holy Church of America. At its founding, women comprised six of nine members of the Board of Elders as well as the top four officers. The denomination spread rapidly along the eastern seaboard, largely due to Ida’s evangelistic work and church planting. She was consecrated as bishop in 1925. When she died, the denomination consisted of 84 churches, more than 160 ordained ministers of whom 125 were women, an accredited school in Philadelphia, mission work in Cuba and Guyana, and a farm in South New Jersey that provided a safe haven away from the city for church members.