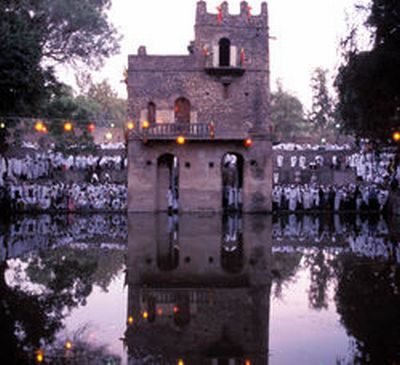 Gondar is the former capital of the emperors of Ethiopia and remains a regional center to this day. Around 1635, Emperor Fasiladas (reign 1632-67) began construction on a castle in the Gondar Valley near the shores of Lake Tana. The fortification was ideally situated along trade routes and had ready access to wood, water and foodstuffs from the agricultural regions along the northern shore of the lake. Because of these factors, Gondar would be able to grow into the first true Imperial Ethiopian capital. This designation was solidified by Fasiladas’ successor Yohannes (reign 1667-82) who was crowned and died in the city. Despite a growing political importance, early Gondar was not a particularly beautiful city. Charles-Jacques Poncet, a French pharmacologist residing in the capital around 1700, was impressed by the majesty of the Imperial court but not by the mud houses that made up the city.

Nevertheless, as the city grew, each successive emperor built new palaces, churches and monuments. Fires, such as the one set in 1732 when forces loyal to Iyasu II ( reign 1730-55) defeated a rebel force in the city, provided an excuse for an emperor to build and rebuild. The trade that fueled the growth of the city was conducted in weekly markets held south of the castle complex. The growth also had a demographic influence as well. Ecclesiastical suburbs were formed, such as the Muslim Islambet or Islamge; the Jewish community of Falasha Bet that was involved in blacksmithing and pottery making; and Echege Bet and Abuna Bet, both centers for the Ethiopian Church.

Whereas Fasiladas, Yohannes and their predecessors had been strong monarchs, the emperors who followed them were increasingly weak and confined to their palaces in Gondar. By the time of the boy-king Iyoas (reign 1755-69), the decline was complete and the future Gondarine monarchs would be dominated by various ras, upper nobility roughly equivalent to British dukes. Gondar itself would frequently become the stage of conflict for the ras attempting to control the current emperor. By 1814, the great palaces of Gondar were described by a traveling Englishman as being in decay. What was left of Gondar’s glory days was destroyed when Tewodros, a ras who had been declared emperor, sacked the city in 1864 and again in 1866, and moved his capital to Mekdela. Gondar today remains one of the major cities of modern Ethiopia with a population of roughly 200,000.