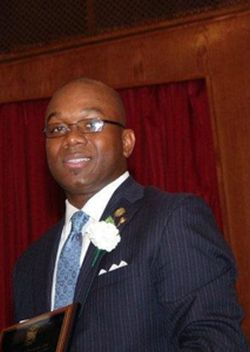 Marco McMillian was known primarily as the first openly-gay African American man to seek mayoral office as a Democrat in his hometown of Clarksdale, Mississippi. On February 26, 2013, McMillian was found dead the age of 34, having been beaten, dragged, and burned.

While living in Washington, D.C., McMillian served as an international executive director of the historically black Phi Beta Sigma Fraternity, Inc. where he was responsible for securing the first federal contract to raise the awareness of the adverse impact of HIV/AIDS on communities of color. He also served as executive assistant to the President of Alabama A&M University and as assistant to the vice president at Jackson State University.

In 2012, about eight months before his murder, McMillian had returned to his hometown, Clarksdale, an impoverished Mississippi Delta city known primarily for its long history of producing and cultivating blues musicians.  After his return he decided to enter the mayoral race in his first foray into electoral politics. Facing four other viable candidates, he campaigned around reducing crime and boosting employment opportunities.

Already a political star on the rise, in 2004, Ebony Magazine included him on a list of “30 up-and-coming African-American leaders.”  He was also included on the 2008 list of Who’s Who among Executives, Professionals and Entrepreneurs, published by Cambridge University Press.  In September 2009 he was one of 27 interesting personalities profiled in the inaugural publication of Who’s Who in Washington, D.C. Others profiled included Vernon Jordan, former mayors Marion Berry and Sharon Pratt Kelly, and Howard University President Sidney Ribeau.  The next month he received the Thurgood Marshall Prestige Award from the Thurgood Marshall College Fund. McMillian was founder and CEO of MWM & Associates, a nonprofit consulting firm that according to its homepage is “dedicated to meeting the challenges of change.”

McMillian’s funeral was attended by 700 people including a number of prominent politicians and civil rights leaders such as Georgia Congressman John Lewis and Mississippi Congressman Bennie Thompson, whose district includes Clarksdale.  Thompson has called for a federal investigation into McMillian’s murder.

On February 28, 2013, a 22-year-old man named Lawrence Reed was arrested and charged with the murder of McMillian by the Coahoma County Sheriff’s Department. Although Reed claimed that he acted in self defense, he was found guilty of murder and sentenced to life in prison on April 2, 2015.