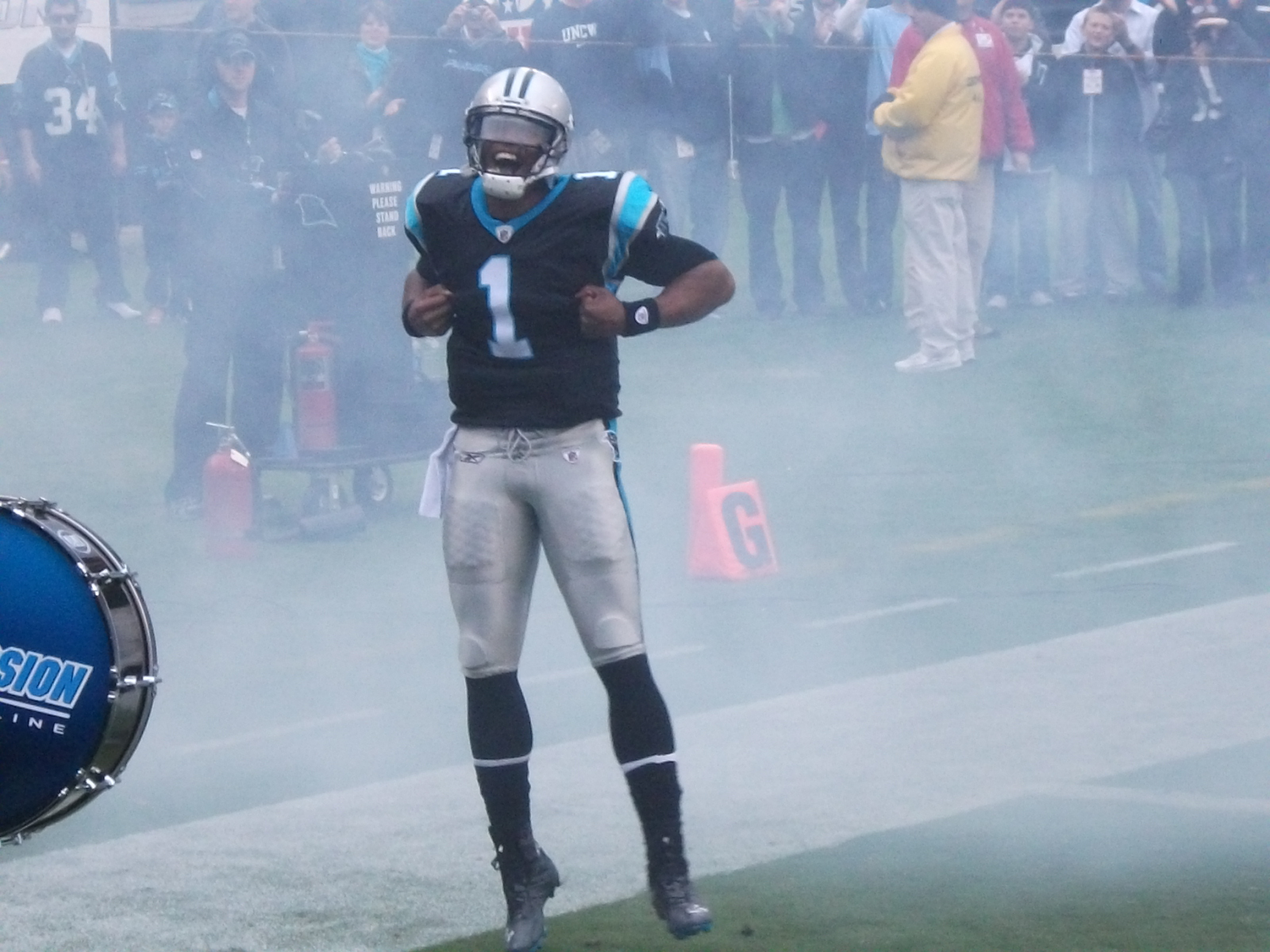 Cameron Jerrell “Cam” Newton is an American football quarterback who played for the Carolina (North Carolina) Panthers and is now the quarterback for the New England (Massachusetts) Patriots in the National Football League (NFL). Newtown was born on May 11, 1989 to Jackie and Cecil Newton in Atlanta, Georgia. He has two brothers, Cecil Newton Jr., who played center for the Jacksonville (Florida) Jaguars and Caylin Newton who played quarterback for the Howard University Bisons football team. Newton attended Westlake High School in Atlanta, Georgia where he played for the school football team. During his junior year, Newton passed for 2,500 yards and 23 touchdowns and ran for 638 yards and nine touchdowns. During his senior year, Newton was a five-star prospect by Rivals.com, the No.2 dual threat quarterback and the 14th quarterback and 28th player overall. For his high school performance, Newton received scholarship offers from numerous universities including Virginia Tech, Oklahoma, Mississippi State, Ole Miss, University of Maryland, University of Georgia, and University of Florida.

After graduating from Westlake in 2007, Newton attended the University of Florida in Gainesville, Florida playing for the Florida Gators football team as a backup quarterback to Tim Tebow. During his freshman season, he played only five games but passed for 40 yards on 5-of-10 and rushed 16 times for 103 yards and three touchdowns. During his sophomore season, Newton played the Gators season opener against Hawaii but suffered an ankle injury and took a medical redshirt season. On November 21, 2008, Newton was arrested on felony charges of burglary, larceny, and obstruction of justice when he was accused of stealing a laptop from another University of Florida student. As result he was suspended from the team. Charges against him were later dropped after he completed a court approved pre-trial diversion program.

In January 2009, Newton transferred to Blinn College in Brenham, Texas. Newton led the team to the NJCAA National Football Championship. In that game, he threw for 2,833 yards with 22 touchdowns and rushed for 655 yards. He was named a Juco All-American honorable mention. During his junior year, Newton transferred to Auburn University in Auburn, Alabama to play for the Auburn Tigers. During 2010, Newton led the Auburn Tigers to the BCS National Championship game where they defeated the Oregon Ducks 22-19. Newton threw for 262 yards, two touchdowns, and one interception. Newton also won the Heisman Trophy and AP College Football player of the year award. Newton would forgo his senior year and declared himself for the 2011 NFL Draft.

Newton was selected first overall by the Carolina (North Carolina) Panthers in the 2011 NFL Draft. During his time playing with the Panthers Newton was Pepsi NFL Rookie of the Year, NFL Offensive Rookie of the Year, and three times pro-bowl. Newton’s NFL best season came in 2015 when he won the NFL Most Valuable Player Award, the NFL Offensive Player of the Year Award, and First-Team All-Pro Award. Newton led the Panthers to Super Bowl 50 where they lost to the Denver (Colorado) Broncos. He remained with the Broncos until the end of the 2019 NFL Season and then signed with the New England Patriots for the 2020 season. On October 3, 2020, Newton tested positive for COVID-19 and later recovered. Newton has five children, four with his ex-girlfriend Kia Proctor, and one from another relationship.