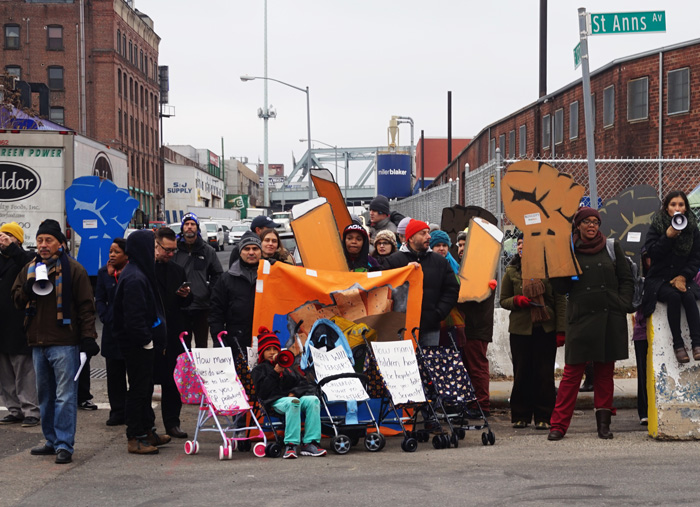 The Bronx is one of New York City’s five boroughs, located in the state of New York. It shares the same boundaries as Bronx County, the country’s third-most densely inhabited county. It is also considered one of the most diverse boroughs in the city. The borough has a Hispanic population of 56%, an African American population of 29%, and a white population of 9%. The borough is also a part of NY-15, the poorest congressional district in the country.

The Bronx has felt the burden of environmental racism; The Bronx is densely populated with an average of 90,000 people living in every 2.2 sq miles, it is also entrapped by four major highways that transport business and other traffic into and out of Manhattan. A 5,000-ton-per-day garbage transfer station, a sewage treatment facility, a FedEx hub, a Fresh Direct warehouse, and a Wall Street Journal/New York Post printing and distribution center. Due to all this, residents face “pollution inequality,” inhaling toxic fumes and pollution at a higher rate than the average New Yorker. According to a comprehensive study conducted by NYU researchers in 2006, there is a direct link between air pollution in the Bronx and high incidence of asthma among residents. It is estimated that the asthma rates in the borough are eight to twelve times higher than the national average giving the borough the nickname “Asthma Alley.”

During the COVID-19 Pandemic of 2020-2021, preliminary studies showed that air pollution is linked to a greater risk of COVID-19 mortality. The Bronx has suffered disproportionately to both, with COVID-19 death rates being two times higher than the rest of the city. According to a recent study by SUNY’s College of Environmental Science and Forestry and ProPublica and published in Environmental Research Letters the relationship between pollution and COVID-19 is most visible in The Bronx. The borough has the highest COVID-19 death rates and respiratory risks compared to thousands of other studied neighborhoods across the United States.

Although New York City has significant environmental racism, it also has one of the oldest environmental justice movements in the country. In 1988, a group of activists from Brooklyn’s Brownsville neighborhood successfully sued the city for $1.5 million in damages related to the North River Sewage Treatment Plant’s smokestacks which were fewer than ten blocks away from the local middle school. There was also a continuous 24-hour cycle of diesel trucks idling outside the factory, contributing to the bad air quality in this predominantly Black and Latino neighborhood.

Currently, multiple grassroots activists and organizations are combating environmental racism and working to achieve a more sustainable future. The Southern Bronx River Watershed Alliance (SBRWA) is one such organization. SBRWA is a partnership of community-based groups which formed as a direct response to the New York State Department of Transportation’s (NYSDOT) harmful proposal to expand the Sheridan Expressway. They called instead for transforming the expressway into a tree lined boulevard. SBRWA is working toward a vision of the southern Bronx River watershed that includes a healthy environment, a thriving economy, and a community that benefits from the river as a valuable natural resource. They hope to reach these goals through advocacy, community engagement and awareness.