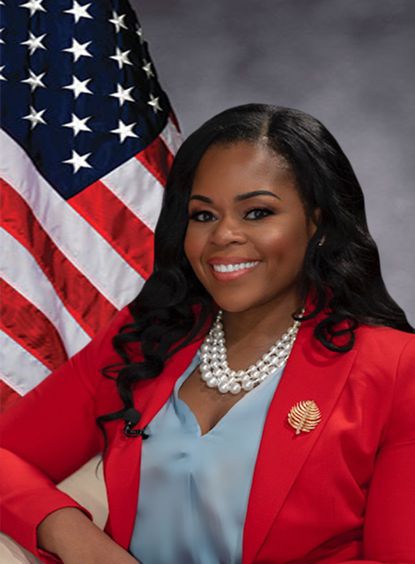 Sheila Cherfilus-McCormick is a Haitian American businesswoman, attorney, and politician, who currently serves as the U.S. Representative from the state of Florida’s 20th congressional district. She was born on January 25, 1979 in Brooklyn, New York. Her stepfather, Dr. Gabriel Smith, and her mother, Marie (Cherfilus) Smith, are both from Haiti. Cherfilus was raised in Queens, and when she was thirteen, the family relocated to Florida, where she attended Chaminade-Madonna College Preparatory in Hollywood, Florida, and graduated in 1997.

Cherfilus began working at Trinity Health Care Services as an intern in 1999 while attending Howard University in Washington, D.C., where she was a member of the Golden Key Honor Society. She graduated with her BA in political science and government in 2001, and was promoted to Operations Manager at Trinity Health Care in 2002. She then briefly worked as a project manager for the New York City Transit Authority. From 2005 to 2007, Cherfilus attended the University of Maryland Global Campus, as she worked towards her MBA in business administration and management, and served as the Vice President of Operations at Trinity Health Care Services.

While attending St. Thomas University College of Law in Miami, Florida, Cherfilus was a legal intern for attorney Robert J. Friedman, as well as the Surfside Town attorney’s office and the Law offices of the Public Defender in Miami. She graduated in 2010, and was promoted to Chief Executive Officer (CEO) at Trinity Health Care Services. In 2017, Cherfilus married lawyer Corlie McCormick, and the couple have two children together. Throughout her career, Cherfils-McCormick advocated for healthcare expansion, and made many trips to Capitol Hill to lobby on that issue.

In Florida, where Cherfilus-McCormick lives, nearly half a million Haitian Americans call the state home. Frustrated with the lack of motivation in Congress to pass legislation that would assist the Haitian American community in Florida, Cherfilus-McCormick made the decision to run for Congress in 2017. She was unsuccessful in 2018 and 2020 against longtime U.S. Representative Alcee Hastings. When Hastings died of pancreatic cancer in April 2021, leaving a vacancy and the need for a special election to fill his seat, Cherfilus-McCormick poured an astounding $2.3 million dollars of her own money into her campaign, and won with 78% of the vote. She now represents the Broward-Palm Beach County 20th Congressional District, and is only the second Haitian American ever elected to Congress, the first being Rep. Mia Love of Utah (2015-2019). Cherfilus-McCormick is a member of the Congressional Black Caucus, the Committee on Education and Labor and the Committee on Veterans Affairs.