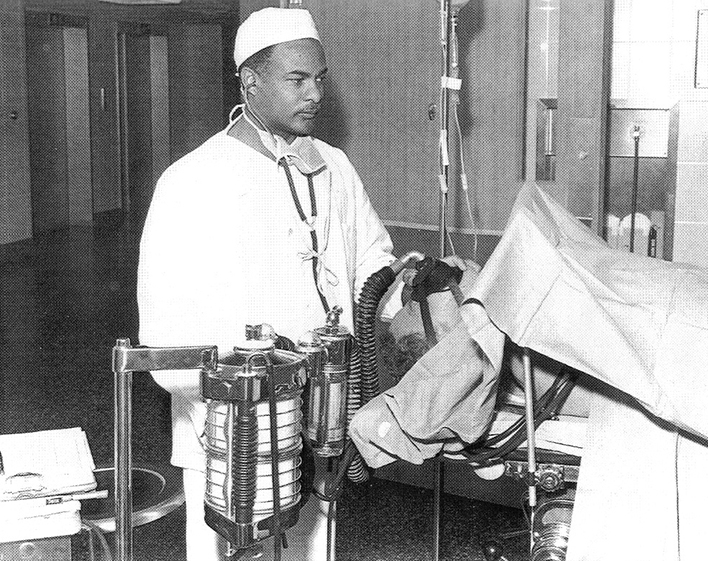 Herman Barnett, a physician, civil rights activist, and Tuskegee Airman achieved a significant number of “firsts” in Texas history. Born on January 22, 1926 in Austin, Texas, Barnett was the son of Hencil Barnett and Lula Searcy Barnett. After graduating from Phyllis Wheatley High School, he enlisted in the military at Fort Sam Houston in 1944 after his aptitude test scores qualified him for pilot training at the Tuskegee Army Flying School in Tuskegee, Alabama. As a commissioned officer and fighter pilot in the all-black 332nd Fighter Group, his service in World War II ended before he experienced combat.

Barnett returned to Austin and enrolled in Samuel Huston College (now Huston-Tillotson University) where he received his bachelor’s degree with high honors in 1948. Although he realized his childhood dream of becoming a pilot, he sought to pursue his long-held ambition to be a medical doctor. Refusing to attend out-of-state medical schools that offered him admission such as the University of Chicago, he challenged the segregated admissions policy of the University of Texas Medical Branch (UTMB) at Galveston. With the support of black newspaper publisher Carter W. Wesley, the Sweatt Victory Fund, the Lone Star Medical and Pharmaceutical Association, and the National Association for the Advancement of Colored People (NAACP), who threatened to sue if Barnett was denied admission, the state agreed to a special arrangement.  This arrangement requested that Barnett first enroll at Texas State University for Negroes (now Texas Southern University) and then attend classes at UTMB. The arrangement was thwarted by the Department of Veteran Affairs, who paid his tuition, because they refused to recognize the TSU arrangement. Therefore, Barnett was allowed to attend UTMB as a regular student on August 12, 1950.

Barnett’s completed his internship and surgical residency at Medical Branch hospitals. He finished another residency in anesthesiology at Houston’s St. Joseph’s Hospital. After working at numerous hospitals in the Houston-Galveston area, Barnett rose to Chief of Surgery at three hospitals including St. Elizabeth’s Hospital, Lockwood Hospital, and Riverside General Hospital. In 1968, Gov. John Connally appointed Barnett as the first African American member of the Texas State Board of Medical Examiners. In 1973, he became the first black president of the Board of Education of the Houston Independent School District (ISD). He also served in several professional associations and community leadership positions such as chairman and president of the North East Houston Investment Corporation, member of Lockwood National Bank board of directors, and trustee of Huston-Tillotson University.

After a short, yet storied career, tragedy struck. In route to an air show on May 27, 1973, his private plane crashed in Wichita, Kansas, killing him at age 47. He was survived by his wife, Wylma Lynn, and five children. In his memory, Houston ISD dedicated the Herman A. Barnett Stadium in 1978.  In 1997, the UTMB established the Herman A. Barnett Distinguished Endowed Professorship in Microbiology and Immunology.