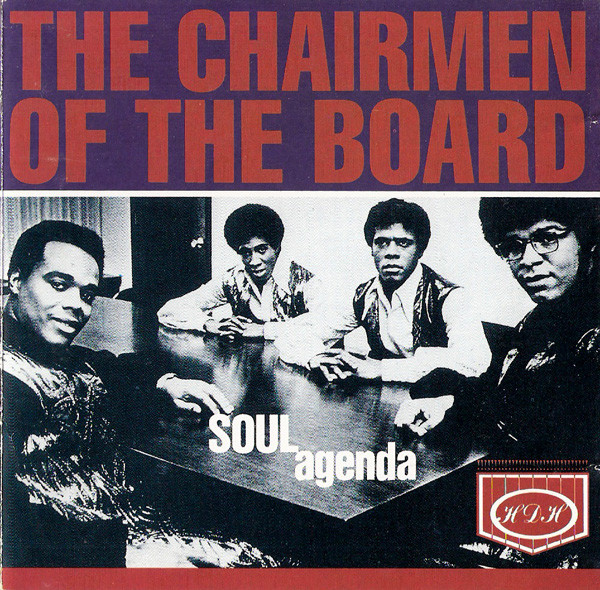 Chairmen of the Board Album Cover

In 1967, legendary composers/lyricists Brian Holland, Lamont Dozier, and Eddie Holland left Motown Records to establish the Invictus/Hot Wax record labels in Detroit, Michigan. Over the years they had composed 130 charting songs for Motown Records, but they felt Berry Gordy did not compensate them with fair royalties. All three composers were Detroit-born. Brian Holland was born on February 15, 1941; Eddie Holland was born on October 30, 1939; Lamont Herbert Dozier was born on June 16, 1941.

After leaving Motown Holland, Dozier and Holland partnered with General Norman Johnson (born May 23, 1941), Eddie Custis (born August 18, 1941) and Daniel Woods, Jr., (born March 27, 1942). All were natives of Detroit. Months later, they invited two other Detroiters, Harrison Kennedy (March 9, 1942) and Ken Knox (born January 13, 1952). Johnson, Custis, Woods, Kennedy and Knox were proficient with several musical instruments, they sang, and were lyricists. In 1968 they formed the ensemble initially called the Gentlemen which would eventually become the Chairmen of the Board.

The Chairmen of the Board would become one of the first acts signed by Holland/Dozier/Holland. They charted six hits in the 1970s starting with their first single in 1970, “Give Me Just a Little More Time,” which sold more than one million copies, peaked at no. 3 on the Billboard pop charts and no. 8 on the R&B chart. The recording remained on the charts for 13 weeks and peaked at no. 3 on the UK Singles Chart. Their next releases “(You’ve Got Me) Dangling on A String” and “Everything’s Tuesday” both hit no. 38 and stayed on the Billboard Hot 100 chart for 9 weeks.

The Chairmen of the Board disbanded in 1976. Two years later Johnson, Woods, and Knox reformed the ensemble and began touring again. In 1980 they founded Surfside Records, based in Charlotte, North Carolina. Under that label, they released remakes of “Don’t Walk Away” and “Loverboy” in 1987, and in 1993, they released their fourth studio album, What Goes Around Comes Around.

In 1999, The core members of Chairmen of the Board, Johnson, Woods, and Knox, were inducted into the North Carolina Music Hall of Fame. General Norman Johnson continued to perform with Woods and Knox as the Chairmen of the Board until his death from lung cancer on October 13, 2010, in East Point, Georgia, at age 67.

In 2012, Chairmen of the Board released a single, “You,” composed and produced by Knox. The second founding member, Daniel Woods, Jr died on January 12, 2018, at age 75 in Atlanta, Georgia.