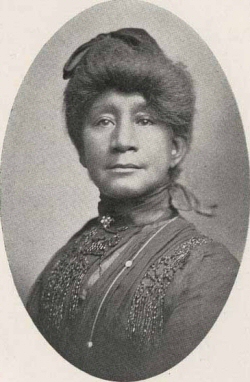 Hester Jeffrey, an organizer and activist who became involved in the women’s movement in the city of Rochester, New York, was born in Norfolk, Virginia around 1842. Jeffrey was the daughter of free parents Robert and Martha Whitehurst. In 1860 Jeffrey, along with her brother and sister, moved to Boston to live with their uncle Coffin Pitts. In 1865 she married Jerome Jeffrey, the son the Rev. Roswell D. Jeffrey, in Boston. Rev. Jeffrey was a political activist who stored the printing press of Frederick Douglass’s North Star in the basement of the Favor Street A.M.E. Church in Rochester, New York.

Hester Jeffrey founded a number of local African American women’s clubs among the growing African American community in Rochester in the early 1890s. In 1897, Jeffrey was appointed to serve on the (Frederick) Douglass Monument Committee, to raise funds for a statue that was going to be erected in Rochester, New York, in the honor of Frederick Douglass, abolitionist, journalist, and champion of woman’s suffrage. After the commemoration of the Douglass Monument, Hester Jeffrey emerged as a leader in Rochester’s African American community. Jeffrey founded two women’s organizations, the Climbers and the Hester C. Jeffrey Club. The Jeffrey Club was an organization to raise funds for colored women to take classes at the Mechanics’ Institute (now called the Rochester Institute of Technology).

In 1902, Jeffrey organized the Susan B. Anthony Club for Colored Women and served as its first president. The club advocated women’s suffrage.  It also assisted mothers with small children by creating the Mother’s Council.  Later that year Hester Jeffrey spoke at a Buffalo, New York convention of the National Association of Colored Women  (NACW), a group founded in 1896 by prominent African American women activists. Jeffrey, a friend and associate of Susan B. Anthony, was chosen to give a eulogy at Anthony’s funeral in 1906. Jeffrey died in Rochester in 1934.