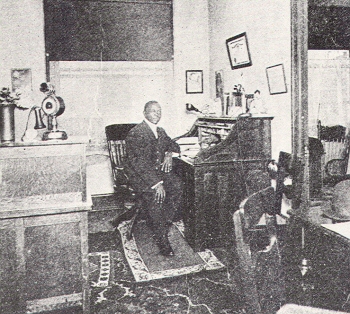 “With this issue The Advocate makes its initial bow to the Portland public as an independent, non-partisan, non-sectarian weekly newspaper for the intelligent discussion and authentic diffusion of matter appertaining to the colored people, especially of Portland and the State of Oregon.”

These words heralded the debut of The Advocate on Saturday, 5 September 1903. Founded by Edward D. Cannady and nine colleagues, most of whom worked for the Hotel Portland, the weekly newspaper featured birth and death announcements, hotel and society news, and general good news about the race. In addition, articles and editorials about segregation, lynching, employment opportunities and other issues kept the realities of Jim Crow laws and the pressing need for civil rights on the local, state, and national agenda.

Beatrice Cannady, who assumed much of the responsibility for running the paper after the couple married in 1912, stated that she used the newspaper to challenge sociopolitical attempts to deprive black people of their rights as citizens, to deny black people their humanness, and to degrade their African cultural heritage.

Many in Portland’s African American community called the black press one of the most important African American institutions in that city and singled out The Advocate as the city’s most influential newspaper. Although impact can be difficult to measure, one study of The Advocate (cited below) reveals a rich, ongoing conversation about interracial relations in Oregon and the rest of the country during the early 1900s.