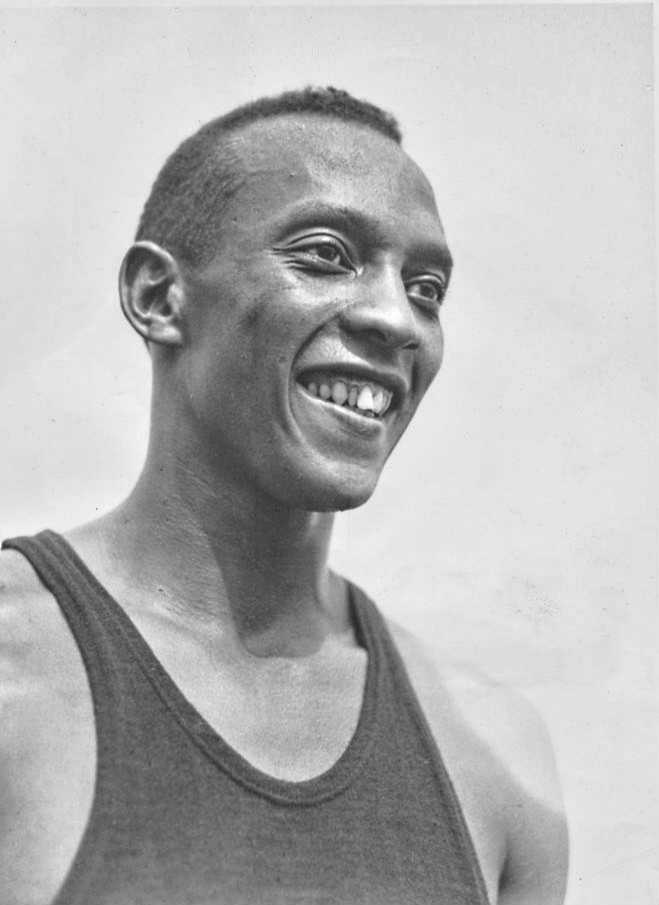 James Cleveland “Jesse” Owens is best known for his remarkable athletic performance at the 1936 Berlin Olympics where he won four gold medals.  Owens was born near Oakville, Alabama, on September 12, 1913, the twelfth child of sharecroppers Henry Cleveland and Mary Emma Owens.  Owens, the youngest child, was spared much of the difficult farm work because of his persistent pneumonia which nearly killed him twice in his young life.

In 1922 Henry and Emma Owens moved north to Cleveland, Ohio.  The move immediately exposed young Owens to regular schooling and participation in athletics. During his senior year at East Technical High School Owens ran the 100-yard sprint in 9.4 seconds, tying the national record at the time and garnering his first national attention.

After completing high school in 1933 Owens attended Ohio State University at a time when the institution offered no athletic scholarships. He worked part-time to support himself through college as he continued to set records on the track field.  On May 25, 1935 during the National Intercollegiate Championship at Ann Arbor, Michigan Owens set four new world records in the 100 yard sprint, the long jump, the 220 yard sprint, and the 220 yard low hurdles.

On July 5, 1935 Owens married Minnie Ruth Solomon in the living room of her parents’ Cleveland home.  The couple had three girls, Gloria, Beverly, and Marlene.

As 1936 began Owens was the favorite to make the US Olympic team where he joined Ralph Metcalfe, the previous record holder in the 100 yard sprint.  The Olympic Games were scheduled for Berlin and Adolf Hitler used the setting to promote Nazi theories of Aryan supremacy and the reemergence of Germany on the world political scene.  At the beginning of the games, German athletes dominated their competitors before home crowds numbering over 100,000.  Most observers believed the Germans would win gold medals in most major track and field events. Owens surprised them by winning four gold medals in the 100 meter sprint, the long jump, the 200 meter sprint, and the 4 x 100 meter relay team.

Jesse Owens returned to a ticker-tape parade down Fifth Avenue but soon afterwards drifted into obscurity.  When he attempted to capitalize on his success right after the Games by taking lucrative commercial offers, US athletic official stripped him of his amateur status.  Soon afterwards the commercial offers disappeared as well. He failed to make a living as a sports promoter, performed in vaudeville shows, ran a dry cleaning business, and eventually filed for bankruptcy.

In 1968 Owens was appointed to the US Olympic Committee (USOC) and immediately became controversial for criticizing the black power salute by African American sprinters Tommie Smith and John Carlos in the 1968 Summer Olympics.  Owens reconsidered his position on the salute and the politics behind it in a 1972 autobiography called I Have Changed. Owens was a member of Alpha Phi Alpha Fraternity.

Owens, who had retired to Phoenix, Arizona in the 1960s, spent the rest of his life as a champion for underprivileged children, building youth clubs nationally, and a community medical center in South Phoenix, an area heavily populated by African Americans, Mexican Americans, and working class people.  A chain smoker, Jesse Owens died of lung cancer in Tucson, Arizona, on March 31, 1980.