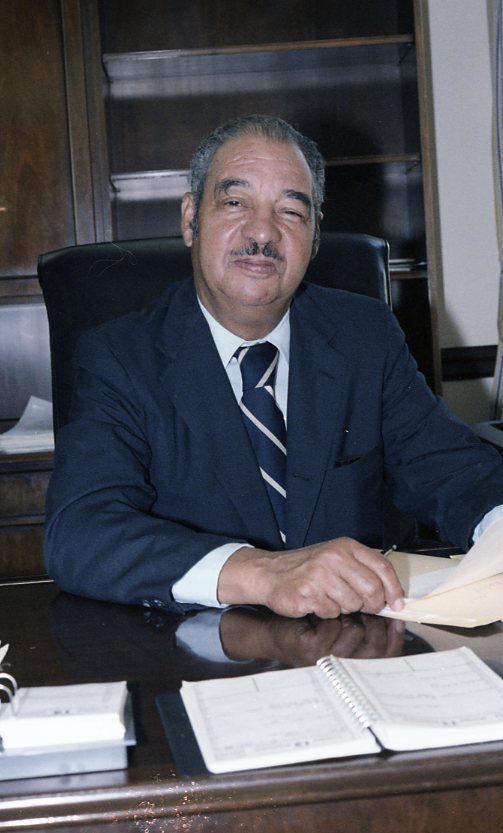 Louis E. Martin was a newspaper editor and political activist, who served as an advisor to three American presidents. He used his political influence to secure key federal appointments for African Americans. He is credited with developing the black support that helped elect John F. Kennedy to the presidency in 1960, and he worked with President Lyndon Johnson to enact the Civil Rights Act of 1964.

Louis Emanuel Martin was born on November 18, 1912, to Cuban-born doctor Louis Martin, Sr. and Willa Martin, an African American. Born in Shelbyville, Tennessee, he was raised in Savannah, Georgia, where he met his future wife, Gertrude Scott. The two were married in 1937.

Martin began his studies at Nashville’s Fisk University and transferred to the University of Michigan, where he earned a B.A. in journalism in 1934. He began his journalistic career as a freelance writer in Havana, Cuba and then signed on with the Chicago Defender. In 1937 he was sent to Detroit to help found The Michigan Chronicle. It was during his eleven-year stint at the Detroit paper that he became an active Democrat, recognizing the benefits the Democratic Party offered in terms of advancing the cause of organized labor and black civil rights. Martin was an advocate for African American movement from the Republican Party to Democratic Party primarily because of the New Deal policies of President Franklin D. Roosevelt.

In 1947, Martin returned to the Defender as editor-in-chief, a post he held until 1959. From 1969 to 1978, Martin served as vice president and editorial director of the Sengstacke Newspaper chain that owned the Defender, The Chronicle and the Pittsburgh Courier, among others. He was the chain’s president from 1976 to 1978 and wrote weekly columns for the Defender from 1987 until his death in 1997.

Louis Martin had an equally prolific career in politics in Washington D.C. He was known throughout the capital as the “godfather of black politics,” acting as the unnoticed liaison between African Americans and U.S. presidents from Franklin Roosevelt to Jimmy Carter. He was particularly influential in the appointment of many African Americans to prominent federal positions, including Thurgood Marshall’s appointment to the United States Supreme Court in 1967 and Clifford Alexander as Secretary of the Army in 1977.  Martin was the deputy chairman of the Democratic National Committee–from 1961 to 1969–during the terms of President Kennedy and President Johnson.

Louis Martin served as an aide to three democratic presidents, John F. Kennedy, Lyndon B. Johnson and Jimmy Carter.  In 1960, Martin played an influential role in President Kennedy’s decision to call Coretta Scott King after her husband, Dr. Martin Luther King Jr., was jailed for a violating probation.  Kennedy’s call to Mrs. King was credited as the cause for the large support of African Americans during the election later that year. In 1978, President Carter appointed Martin to be a special presidential assistant specializing in policies that affected minorities and women, a post he held until 1981. He was the assistant vice president of communications at Howard University for six years.

In 1988, Louis Martin suffered a stroke. He recovered and moved to California, where he continued writing for the Chicago Defender for the next ten years. On January 27, 1997 Martin died from pneumonia in Orange, California.  He was 84.