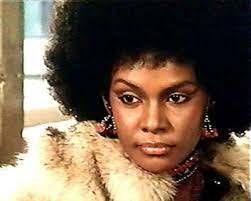 Tamara Dobson was a tall, glamorous model-turned-actress best remembered for playing the title roles in the blaxploitation films Cleopatra Jones (1973) and Cleopatra Jones and the Casino of Gold (1975). Like most other blaxploitation leading players, she achieved quick stardom during the era’s heyday, but was not able to establish career roots for success in the post-blaxploitation period.

Tamara Janice Dobson was born on May 14, 1947 in Baltimore, Maryland to parents Melvin and Evelyn Russell Dobson. She attended Western High School, an academically demanding all-girls institution. After a stint as a beautician, she enrolled at the Maryland Institute College of Art, where she studied fashion illustration and began modeling in fashion shows. Spotted by a professional, she was hired to work in filmed commercials and other modeling jobs. After college, Dobson moved to New York and began a professional modeling career.

She modeled for Vogue, Jet, and Essence. She also shot TV commercials for major design and perfume houses, including Chanel, Revlon, and Fabergé. She appeared in two films—Come Back, Charleston Blue (1972) and Fuzz (1972)—before being tapped to play the larger-than-life Cleopatra Jones, a sort of female James Bond, in the espionage thriller of the same name.

Stunning and 6’2” tall (cited by the Guinness Book of World Records as the tallest leading lady in films), and unafraid to maximize her height with a huge Afro hairdo, she added to her image of the commanding Black woman in the age of Black Power with a distinctive wardrobe influenced by her fashion model background and marked by the liberal use of fur. Cosmopolitan called her “the Gorgeous Skyscraper” worthy of the cult status that would later be accorded her.

Following the collapse of the Black action genre in the mid-1970s, her career declined like those of many other Black actors stigmatized by their connections to blaxploitation. She appeared in several undistinguished films, including supporting roles in the Redd Foxx comedy Norman, Is That You? (1976), Murder at the World Series (1977), and Chained Heat (1983). She also played guest roles on two TV series, Jason of Star Command (1979) and Buck Rogers in the 25th Century (1980). Dobson eventually grew disillusioned with her acting career and returned to New York City where she invested in real estate.

Diagnosed with multiple sclerosis (MS) in 2000, she spent the last two years of her life at the Keswick Multi-Care Center in Baltimore, where she died of complications of MS and pneumonia on October 2, 2006. She was 59.