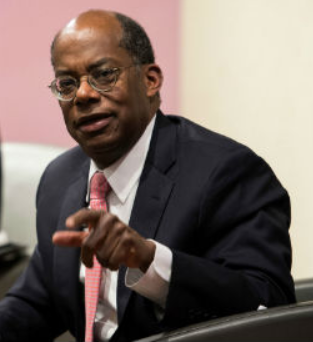 Roger W. Ferguson Jr., an economist and lawyer, was born in Washington, D.C., on October 28, 1951. His father was a cartographer for the U.S. Army, and his mother was a public school teacher. He received his early education at Sidwell Friends School and graduated in 1969. Ferguson received a B.A. in Economics in 1973, a J.D. in 1979, and a Ph.D. in economics in 1981, all from Harvard University. Ferguson was the recipient of a Frank Knox Memorial Fellowship, and between 1973 and 1974, he attended Pembroke College at Cambridge University.

From 1981 to 1984, Ferguson was a lawyer at the New York City office of Davis, Polk & Wardell, and from 1984 to 1997, he was a partner at McKinsey & Company. In November 1997, Ferguson became a member of the Board of Governors of the U.S. Federal Reserve System, and in October 1999, he was elected vice chairman, a position he held until 2006. Between July 1998 and March 2000, Ferguson served as chairman of the Joint Y2K Council. During the September 11, 2001 attacks on America, Ferguson was the only Federal Reserve governor in Washington and was responsible for leading the initial response to the terrorist attacks. Ferguson was praised for his quick thinking and expert handling in one of America’s biggest crisis situations.

In 2003 Ferguson became the chairman of the Federal Reserve Board’s Committee on the Global Financial System (CGFS), while also serving as its chairman of Financial Stability Forum. In February 2006, Ferguson sent his letter of resignation from the Board to President George W. Bush. Later the same year, Swiss RE announced Ferguson’s appointment as chairman of Swiss Re America Holding Corporation.

On April 4, 2008, Ferguson was named the new president and CEO of the Teachers Insurance and Annuity Association-College Retirement Equities Fund (TIAA). He also serves as a board member at General Mills, International Flavors and Fragrances, and Audax Health.

Between 2010 and 2012, Ferguson co-chaired a National Research Council panel on the Macro-Economic Effects of the aging U.S. Population. And in 2014–2015, he was a member of the Panel of Economic Advisers for the Congressional Budget Office.

Ferguson is currently a member of the board of overseers of Harvard University and the Boards of Trustees for the Institute for Advanced Study, Carnegie Endowment for International Peace, and the New America Foundation. He is on the board of directors of the Partnership for the New York City, and a member of the Council on Foreign Relations, the Economic Club of New York, and the Group of Thirty. Ferguson is also a member of President Obama’s Economic Recovery Advisory Board.

Ferguson is married to the former United States Securities and Exchange Commission Commissioner, Annette Nazareth. The couple has two children.