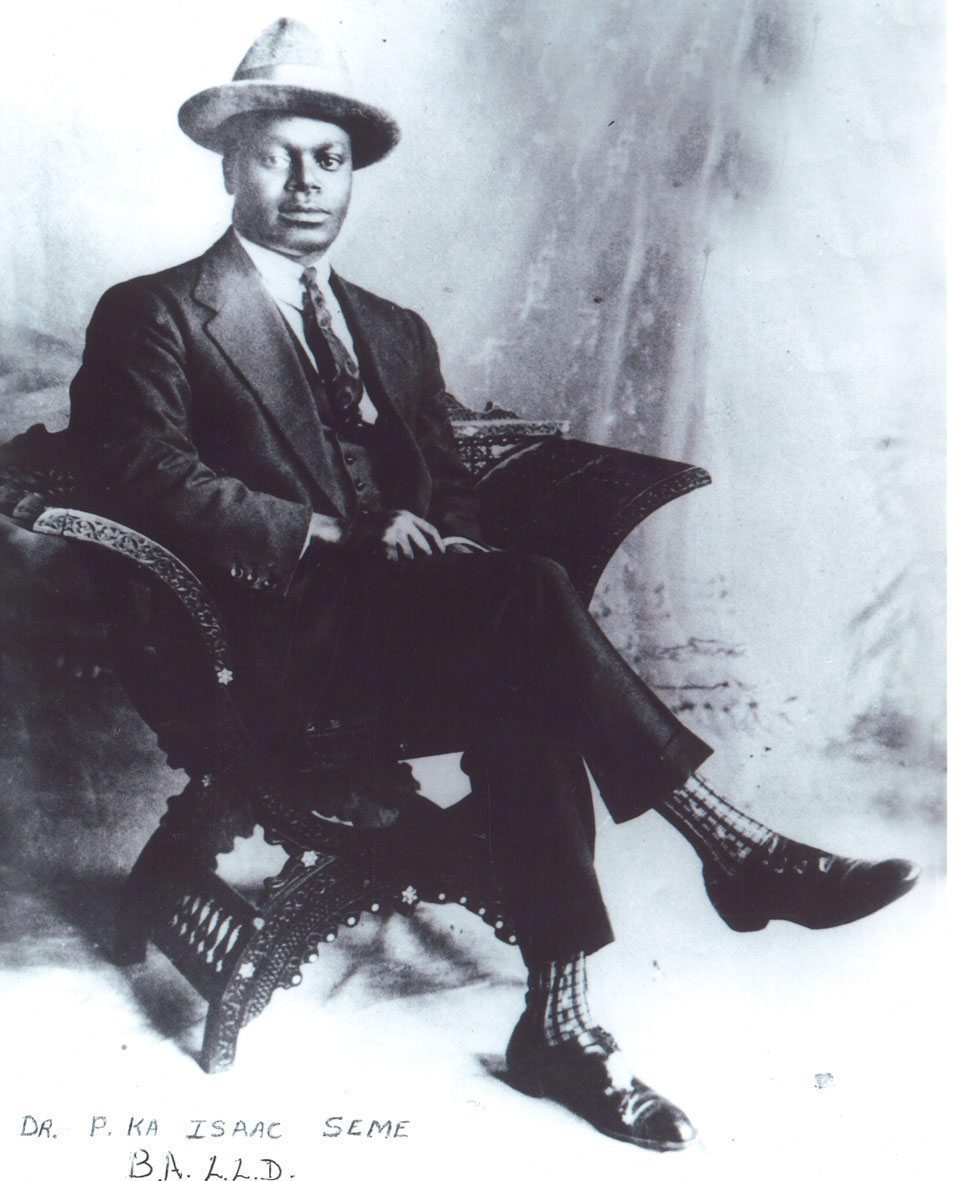 Pixley Isaka Seme was one of the first western-educated Africans to challenge the European colonialism then sweeping across the continent. Born in Natal, South Africa, Eme was educated at Columbia and Oxford Universities in the United States and Great Britain where he also became an attorney.  Upon returning to South Africa, Seme in 1912 along with other black intellectuals and activists founded the African Native National Congress (now the African National Congress).   In 1906, however, he gave the address below to the Royal African Society in London.

I have chosen to speak to you on this occasion upon the regeneration of Africa. I am an African, and I set my pride in my race over against a hostile public opinion. Men have tried to compare races on the basis of some equality. In all works of nature, equality—if by it we mean identity—is an impossible dream. Search the universe! You will find no two atoms, identical. Nature that bestowed upon each a peculiar individuality, an exclusive patent—from the great giants of the forest to the tenderest blade. Catch in your hand, if you please, the gentle flakes of snow. Each is a perfect gem, a new creation; it shines in its own glory—a work of art different from all of its aerial companions.

Man, the crowning achievement of nature, defies analysis. He is a mystery through all ages and for all time. The races of mankind are composed of free and unique individuals. An attempt to compare them on the basis of equality can never be finally satisfactory. Each is self. My thesis stands on this truth; time has proved it. In all races, genius is like a spark which, concealed in the bosom of a flint, bursts forth at the summoning stroke. It may arise anywhere and in any race.

I would ask you not to compare Africa to Europe or to any other continent. I make this request not from any fear that such a comparison might bring humiliation upon Africa. The reason I have stated: a common standard is impossible. Come with me to the ancient capital of Egypt, Thebes—the city of one hundred gates. The grandeur of its venerable ruins and the gigantic proportions of its architecture reduced to insignificance the boasted monuments of other nations.

The pyramids of Egypt are structures to which the world presents nothing comparable. These mighty monuments seem to look with disdain on very other work of human art and vie with nature herself. All the glory of Egypt belongs to Africa and her people. These monuments are the indestructible memorials of their great original genius. But it is not through Egypt alone that Africa claims such unrivalled historic achievements. I could have spoken of the pyramids of Ethiopia, which, though inferior in size to those in Egypt, far surpass them in architectural beauty; their sepulchers, which evince the highest purity of taste; and of many prehistoric ruins in other parts of Africa. In such ruins Africa is like the golden sun that, having sunk beneath the western horizon, still plays upon the world which he sustained and enlightened in his career.

Justly world now demands,
Whither is fled the visionary gleam
Where is it now, the glory and the dream?

Oh, for that historian who, with the open pen of truth, will bring to Africa’s claim the strength of written proof. He will tell of a race whose onward tide was often swelled with tears, but in whose heart bondage has not quenched the fire of former years. He will write that in these later days, when Earth’s noble ones are named, she has a roll of honor, too, of whom she is not ashamed.

The giant is awakening! From the four corners of the earth, Africa’s sons, who have been proved through fire and sword, are marching to the future’s golden door, bearing the records of deeds of valor done.

Mr. Calhoun, I believe, was the most philosophical of all the slave-holders. He said, once that if he could find a black man who could understand the Greek syntax, he would then consider their race human and his attitude toward enslaving them would therefore change. What might have been the sensation kindled by the Greek syntax in the mind of the famous Southerner, I have so far been unable to discover; but oh, I envy the moment that was lost! And woe to the tongues that refused to tell the truth. If any such were now among the living, I could show him among black men of pure African blood those who could repeat the Koran from memory, skilled Latin, Greek, and Hebrew, Arabic and Chaldais—men of great wisdom and profound knowledge: one corresponding member of the French Academy of Sciences, who regularly transmitted to that society meteorological observations and hydrographical journals and papers on botany and geology; another whom many ages call the Wise, whose authority Mohammed himself frequently appealed to in the Koran in support of his own opinion—men of wealth and active benevolence, those whose distinguished talents and reputation have made them famous in the cabinet and in the field, officers of artillery in the great armies of Europe, generals and lieutenant generals in the armies of Peter the Great in Russia and Napoleon in France, presidents of free republics, kings of independent nations that have burst their way to liberty by their own vigor. There are many other Africans who have shown marks of genius and high character sufficient to redeem their race from the charges which I am now considering.

Ladies and gentlemen, the day of great exploring expeditions in Africa is over. Man knows his home now in a sense never known before. Many great and holy men have evinced a passion for the day you are now witnessing: their prophetic vision shot through many unborn centuries of this very hour. “Men shall run to and fro”, said Daniel, “and knowledge shall increase upon the earth.” Oh, how true! See the triumph of human genius today. Science  has searched out the deep things of nature; surprised the secrets of the most distant stars; disentombed the memorials of everlasting hills; taught the lightening to speak, the vapors to toil, and the winds to worship; spanned the sweeping rivers; tunneled the longest mountain range; made the world a vast whispering gallery; and has brought foreign nations into one civilized family. This all-powerful contact says even to the most backward race, “You cannot remain where you are, you cannot fall back—you must advance.

A great century has come upon use. No rave possessing the inherent capacity to survive can resist and remain unaffected by this influenced of contact and intercourse, the backward with the advanced. This influence constitutes the very essence of efficient progress and of civilization.

From these heights to the twentieth century I again ask you to cast your eyes south of the desert of Sahara. If you could go with me to the oppressed Congos and ask, ‘What does it mean that now, for liberty, they fight like men and die like martyrs?; if you would go with me to Bechuanaland, face their council of headmen, and ask what motives caused them recently to decree so empathically that alcoholic drinks shall not enter their country—visit their king, Khama; ask for what cause he leaves the gold and ivory of his ancestors, its mountain strongholds and all its august ceremony to wander daily from village to village through all his kingdom without a guard or any decoration of his rank—a preacher of industry and education and an apostle of the new order of things. If you would ask Menelik what means this that Abyssinia is now looking across the ocean—oh, if you could read the letters that come to us from Zululand, you, too, would be convinced that the elevation of the African race is evidently a part of the new order of things that belong to this new and powerful period.

The African already recognizes his anomalous position and desires a change. The brighter day is rising upon Africa. Already I seem to see her chains dissolved; her desert plains red with harvest; her Abyssinia and her Zululand the seats of science and religion, reflecting the glory of the rising sun from the spires of their churches and universities, her Congo and her Gambia whitened with commerce; her crowded cities sending forth the hum of business; and all her sons employed in advancing the victories of peace—greater and more abiding than the spoils of war.

Yes, the regeneration of Africa belongs to this new and powerful period!

By this term regeneration I wish to be understood to mean the entrance into a new life, embracing the diverse phases of a higher, complex existence. The basic factor which assures their regeneration resides in the awakened race consciousness. This gives them a clear perception of their elemental needs and of their underdeveloped powers. It therefore must lead them to the attainment of that higher and advanced standard of life.

The African people, although not a strictly homogenous race, possess a common fundamental sentiment which is everywhere manifest, crystallizing itself into one common, controlling idea. Conflicts and strife are rapidly disappearing before the fusing force of this enlightened perception of the true inter-tribal realization, which relation should subsist among a people with a common destiny. Agencies of a social, economic, and religious advance tell of a new spirit which, acting as a leavening ferment, shall raise the anxious and aspiring mass to the level of their ancient glory. The ancestral greatness, the unimpaired genius, and the recuperative power of the race its irrepressibility, which assures its permanence—constitute the African’s greatest source of inspiration. He has refused to camp forever on the borders of the industrial world having learned that knowledge is power, he is educating his children. You find them in Edinburgh, in Cambridge, and in great schools of Germany. These return to their country like arrow, to drive darkness from the land. I hold that this industrial and educational initiative and his untiring devotion to these activities must be regarded as positive evidence of this process of his regeneration.

The regeneration of Africa means that a new and unique civilization is soon to be added to the world. The African is not a proletarian in the world of science and art: he has precious creations of his own—of ivory; of copper and of gold; of fine, plaited willow-ware; and weapons of superior workmanship. Civilization resembles an organic being in its development—it is born, it perishes, and it can propagate itself. More particularly, it resembles a plant; it takes root in the teeming earth, and when the seeds fall in other soils, new varieties sprout up. The most essential departure of this new civilization is that it shall be thoroughly spiritual and humanistic-indeed, a regeneration moral and eternal.

O Africa!
Like some great century plant that shall bloom
In ages hence, we watch thee; in our dream
See in thy swamps the Prospero of our stream;
Thy doors unlocked, where knowledge in her tomb
Hath lain innumerable years in gloom,
Then shalt thou, walking with that morning gleam,
Shine as they sister lands with equal beam.