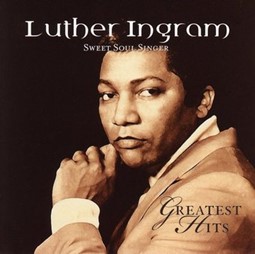 Composer, Lyricist, balladeer, R&B baritone Luther Thomas Ingram was born on November 30, 1937, in Jackson, Tennessee, to Richard Lee and Callie Ingram, both musicians at Walnut Grove Baptist Church located in Jackson. Luther’s early education began at the West Bemis Rosenwald School in 1943. However, when he was 10 years old, in 1947, the Ingrams moved to Alton, Illinois. Luther began singing with his five brothers and one sister who called their family ensemble the Midwest Crusaders. He completed his high school education in Alton and by 1956 19-year-old Ingram was lead singer with the Gardenias, a St. Louis, Missouri group signed to the Federal Records label.

Ingram married Jacqueline Langford from O’Fallon, Illinois, in 1961, a graduate of Columbia College in St. Louis; she died in 2008. They had one son, Eric Luther Ingram, and a stepson, Kenneth Knight from his wife’s earlier marriage. In 1965 the couple migrated to New York City, where he signed with Decca Records. He debuted the single, “You Never Miss Your Water,” in 1965 and two years later, in 1967, he recorded the single, “I Can’t Stop,” in Memphis, Tennessee. Neither early recording fared well.

In 1971 Ingram partnered with the Staple Singers on the Stax label hit, “Respect Yourself,” which sold over a million copies. In 1972, Ingram’s most celebrated composition was the ballad, “(If Loving You is Wrong) I Don’t Want to Be Right.” It peaked at #1 on the Billboard R&B chart and reached #3 on the Billboard Hot 100. The song stayed on the charts for 18 weeks and sold over four million records. Two years following in 1973, his “I’ll Be Your Shelter (In Time of Storm)” peaked at #9 on the R&B chart and remain on the charts for 12 weeks.

Luther Thomas Ingram died of cardiovascular complications on March 19, 2007, in Belleville, Illinois. He was 69.