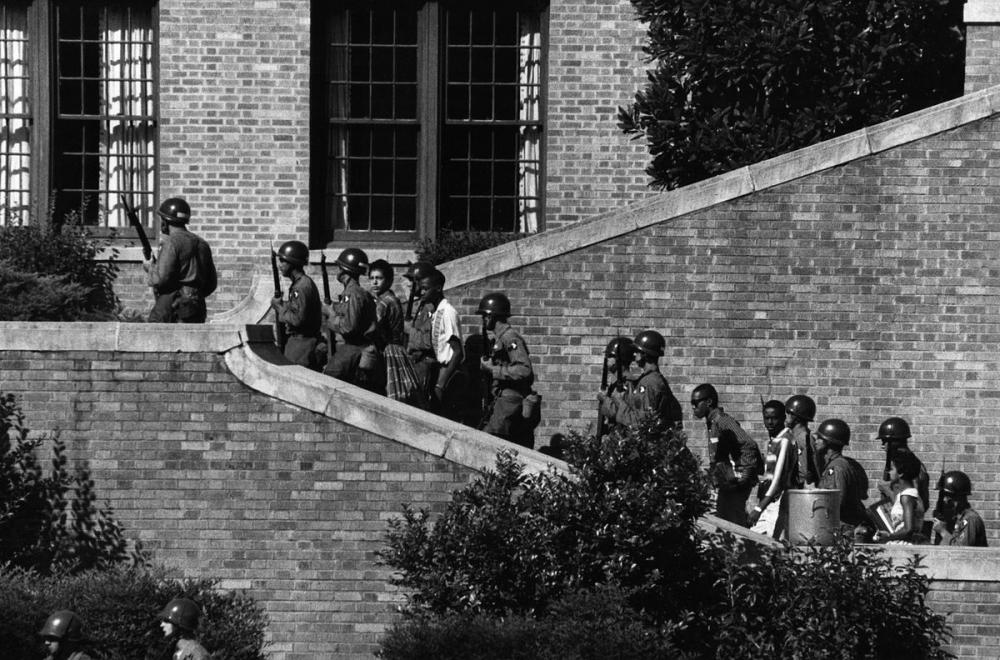 In 1954, the United States Supreme Court declared public school segregation unconstitutional in Brown v. Board of Education. One year later, the Court reiterated its ruling, calling on school districts throughout the United States to desegregate their public schools “with all deliberate speed.” While some school districts began developing strategies to resist public school desegregation, school officials at Little Rock, Arkansas stated that they would comply with the Supreme Court’s ruling.

Although skeptical about integrating a formerly whites-only institution, the nine students arrived at Central High School on September 4, 1957, looking forward to a successful academic year. Instead, they were greeted by an angry mob of white students, parents, and citizens determined to stop integration. In addition to facing racial slurs and physical threats from the crowd, Arkansas Governor Orval M. Faubus had intervened, ordering the Arkansas National Guard to keep the nine African American students from entering the school. Faced with no other choice, the “Little Rock Nine” abandoned their attempt to attend classes that morning. Central High School soon became the center of a national debate about civil rights, racial discrimination and states’ rights.

On September 20, 1957, Federal Judge Ronald Davies ordered Governor Faubus to remove the National Guard from the Central High School’s entrance and to allow integration to take its course in Little Rock. Gov. Faubus withdrew the National Guard, but an angry crowd of more than 1,000 protesters surrounded the school on September 23, the next time the nine students attempted to begin classes. Although they had gained access through a side entrance, the police feared for their safety, and evacuated the students. President Dwight Eisenhower dispatched nearly 1,000 paratroopers and federalized 10,000 Arkansas National Guard troops to ensure that the school would be open to the nine students.  On September 25, 1957, the “Little Rock Nine” returned to Central High School and were enrolled.  Units of the United States Army remained at the school for the rest of the academic year to guarantee their safety.

Elizabeth Jacoway, Turn Away Thy Son: Little Rock, The Crisis That Shocked The Nation (New York: The Free Press, 2007); Mark Carnes and John A. Garraty, The American Nation: A History of the United States Since 1865 (New York: Longman, 2003).