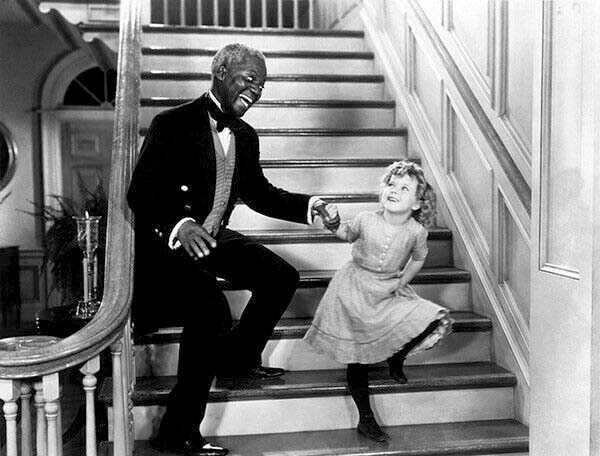 Entertainer Bill “Bojangles” Robinson’s original name was Luther Robinson. He was born on May 25, 1878, to Maxwell, a machinist, and Maria Robinson, a church choir director, in Richmond Virginia. Both parents died tragically in 1885.  Robinson did not like his birth name, Luther, and forced his brother, Bill, to exchange names with him. Robinson and his younger brother, who changed his name to Percy, were raised by their grandmother, Bedelia Robinson, a former enslaved person. As a young man, Robinson earned the nickname “Bojangles” for his happy-go-lucky, enthusiastic personality.

Robinson began his entertainment career performing as a song and dance man, referred to as a “hoofer” at that time, in Richmond beer gardens. In 1886, around the age of nine, he joined Mayme Remington’s touring troupe. By 1891 Robinson joined a traveling vaudeville company, where he performed skits. In his teens, Robinson joined various traveling companies and vaudeville tours, slowly building up a reputation as a comedian in nightclubs and other musical venues. In 1908 he met Marty Forkinsm who became his lifetime manager.  Under Forkinsm’s guidance, Robinson was able to earn over $3,500 per week making him one of the most successful performers of any race, for that period. Despite his huge salary and growing reputation, during the early part of his career, Robinson performed exclusively on the Black theater circuit.

Robinson finally performed before white audiences by the time he was 50 years old. By this time, he was already considered a tap-dancing legend who introduced the “up on your toes” style of dancing using only the lower part of the body and facial expressions in his performances. This method marked a significant change from the flat-footed method of tap-dancing involving the upper part of the body. Robinson is credited for the development of the stair step tap dancing routine and is remembered for his use of that routine with Shirley Temple in four of her 1930s films. During the next decade, he performed in ten other motion pictures including, Dixiana (1930), Harlem in Heaven (1932), and Hooray for Love (1935).

Robinson was also a Broadway star for his role in the 1928 musical, “Blackbirds,” and the 1939 musical, “The Hot Mikado.” Robinsons’ talents transcended his ability to dance. An entrepreneur, he co-founded the New York Black Yankees team which was part of the Negro National League until 1948. During a visit to his hometown, Richmond, Virginia, Robinson had a stoplight installed at the cross-section of Adams and West Leigh in a Black neighborhood, to protect Black children from injury or death trying to cross the busy intersection.

Robinson was the highest-paid Black performer in the first half of the twentieth century, earning more than $2 million during his lifetime. Yet due to his generosity with friends as well as his spending and gambling habits, he died penniless in New York City on November 25, 1949, at the age of 71. Robinson is buried in the Cemetery of the Evergreens, in Brooklyn, New York.