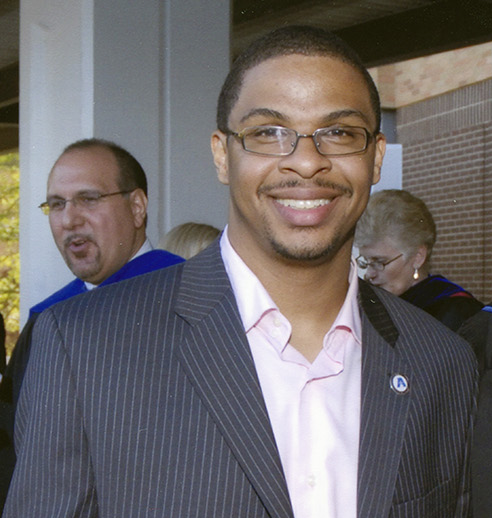 Roland G. Fryer, Jr. is an economist, the youngest African American to receive tenure at Harvard University, and one of the youngest professors in the school’s history. Roland Gerhard Fryer, Jr. was born in Daytona Beach, Florida on June 4, 1977 to Roland Gerard Fryer, a former math teacher and copy machine salesman, and Rita Fryer, a nightclub singer. He was raised by his father in Lewisville, Texas.

Fryer’s father was an abusive alcoholic. Unparented for most of his teenage years, Fryer sold drugs, but after several run-ins with the law, he turned his life around. A star football and basketball player at Lewisville High School, he earned an athletic scholarship to the University of Texas at Arlington. After years of indifference to education, Fryer discovered pleasure in academics. He never suited up for the Texas–Arlington Mavericks. Instead, he joined the Honors College, graduating magna cum laude in 1998. Within three years, Fryer completed his dissertation, “Mathematical Models of Discrimination and Inequality” and obtained his Ph.D. in economics from Pennsylvania State University in 2002. He conducted postdoctoral research at the University of Chicago with Nobel laureate economist Gary Becker.

Mentored by leading scholars in economics, at 25, Fryer joined the Society of Fellows at Harvard (2002). The prestigious fellowship meant he would be unable to teach for three years. The Harvard economics department said they would wait for him. Two years into the SFH fellowship, preeminent humanities scholar Henry Louis Gates Jr. said Fryer was, “destined to be a star.”

Fryer is among a new coterie of researchers who apply empirical methods to social issues beyond traditional economics. His focus has primarily been the causes of racial educational achievement gaps and how to close them. In 2006, he was hired as an assistant professor at Harvard. From 2007-2008, he also applied his nascent theories as Chief Equality Officer for the New York City Department of Education.

As accomplished and celebrated as he is controversial, Fryer caused an uproar when he speculated that Black underperformance is due to genetics and continues to stand by his 2016 study demonstrating no racial bias in police shootings.

After an unexpectedly rewarding career in academics, seemingly avoiding the pitfalls of his childhood and examples set by his father who was convicted of a sexual assault in 1993, allegations of sexual improprieties of his own surfaced. In 2018, Fryer, now one of Harvard’s highest paid professors and the recipient of numerous awards including a MacArthur Genius grant in 2011, was accused of sexually harassing at least five women which is a Title IX violation prohibiting sex-based discrimination by educational institutions that get federal funding. In 2019 he received a two-year suspension and was barred from advising or supervisory roles and banned from the Education Innovation Laboratory (EdLabs) which he founded in 2008. Fryer has apologized for off-color jokes and other infractions but has maintained his innocence.