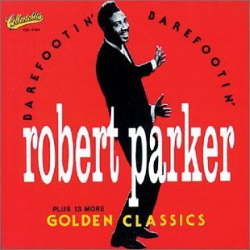 Hear a soundtrack specially chosen to enhance your learning about Robert Parker, Jr. (1930-2020)

Rhythm & Blues musician Robert Parker, Jr. was born on October 14, 1930, in Mobile, Alabama, to Robert Parker, Sr., and Leana Parker. However, he was reared on Melpomene (now Martin Luther King Jr. Boulevard) in New Orleans, Louisiana. He played in the Booker T. Washington High School band and graduated in 1948. Parker played saxophone with Professor Longhair on his hit “Mardi Gras In New Orleans” and Al Johnson’s “Carnival Time” both in 1949.

Throughout the 1940s and 1950s, Parker was a regular performer at the Tijuana Club in New Orleans when he was encouraged by an agent Percy Stovall to start a session recording band Robert Parker and the Royals.

In 1958, Parker began recording as a solo with the instrumental “All Nite Long” that reached no. 113 on Billboard Hot 100 in 1959. In 1965 Parker was working as a Charity Hospital orderly when he penned, “Barefootin.’” He signed with Nola Records, with the hit with “Barefootin.” It was on the campus of Tuskegee Institute in Tuskegee, Alabama that the song would become inspirational to the point that girls took their shoes off and piled them in front of the bandstand before they danced to the song’s syncopated sound. The same occurred when the song was performed in Tuscaloosa for a University of Alabama fraternity party. Eventually “Barefootin” sold more than a million copies, peaking at no.2 on Billboard’s Hot R&B/Hip-Hop Songs chart and remained charted for 17 weeks. It rose to no. 24 UK in 1966. “Barefootin’ proved to be Parker’s only major hit as a solo artist.

In 2007, Parker was inducted into the Louisiana Music Hall of Fame. In 2012 Parker received OffBeat’s “Best of the Beat Lifetime Achievement in Music.” The following year, in 2013, Parker was a principal performer at the New Orleans Jazz & Heritage Music Festival.

From 1968 to 1973, Parker released 10 compositions, including the singles “Give Me the Country Side of Life” and “A Little Bit of Something (Is Better Than a Whole Lot of Nothing”0 but none of them charted. “Barefootin’” however, was re-released in 1987 and peaked at no. 90 UK.