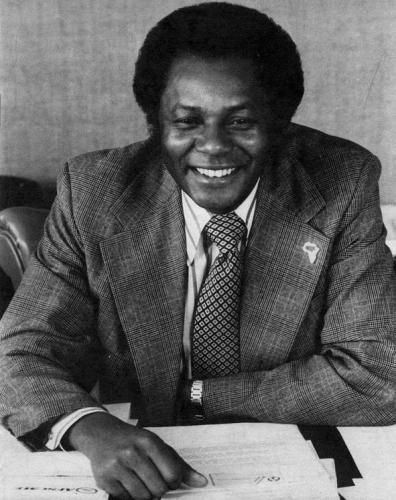 Labor union organizer and leader Bill Lucy was born on November 26, 1933, to Joseph and Susie Lucy in Memphis, Tennessee.  Raised in Richmond, California, Lucy studied civil engineering at the University of California at Berkeley in the 1950s.  He then joined the U.S. Navy in 1951.

Though he never completed his studies, Lucy landed a job working for Contra Costa County in California as an assistant materials and research engineer in 1954.  In 1956, he became a member of the American Federation of State, County and Municipal Employees (AFSCME), local 1675 of Contra Costa.  By 1965, he had been elected president of the local.  In 1966, Lucy left engineering to work full-time for the AFSCME international organization as the associate director of the union’s legislation and community affairs department.

Lucy began his leadership role in the AFSCME when the civil rights movement was shifting its focus to economic issues.  In 1968, mostly black Memphis, Tennessee sanitation workers still received wages far below the minimum wage and had no benefits or job security.  These long-standing inequalities led to the 1968 Sanitation Workers’ Strike where marchers adopted the logo “I am a man.”  Lucy traveled to Memphis to lend his support. There, he worked alongside Martin Luther King, Jr., who was assassinated on April 4, 1968. Despite the assassination, Lucy asked the workers to continue their strike and participated in the negotiations that led to the success and recognition of the sanitation workers’ union.

In 1972, Lucy became Secretary Treasurer of the AFSCME, AFL-CIO, a position he holds to date.  Lucy also founded the Coalition of Black Trade Unionists (CBTU) in 1972, an organization of union leaders and rank-and-file members that helped to define the role of African Americans in the labor movement.  It also addresses the specific labor needs of African American workers.  In the 1980s, Lucy was one of the founders of the Free South Africa Movement that launched the successful anti-apartheid campaign in the United States.

After 3 decades of labor union organizing, Lucy is today the highest-ranking African American in AFSCME, one of the largest unions in the world, with 1.6 million members (approximately 11 percent of overall union membership in the U.S.).  He is also one of the most influential African Americans in the history of labor organizing, having carved out a legacy based on living wages, health care benefits, and job safety for working families around the world.