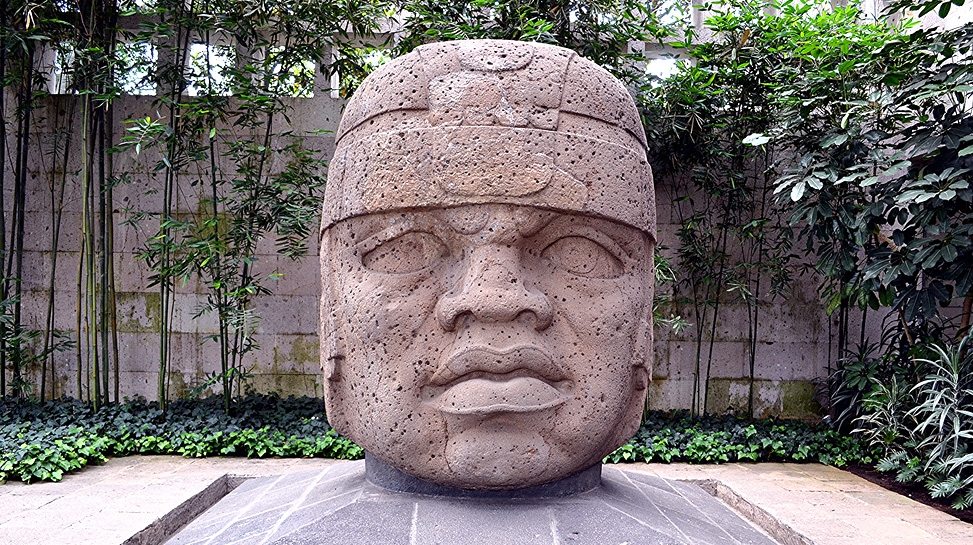 The Olmec heads of Mexico are a collection of 17 giant stone head sculptures believed to have been carved by the Olmecs. The heads, and their inspiration, have been the cause for much debate throughout history.

The Olmec civilization is considered to be the first major Mesoamerican culture and was believed to have existed between 1200 and 400 B.C. It was located along Mexico’s Gulf Coast in what are now known as the Mexican states of Tabasco and Veracruz. The Olmecs were adept traders and artisans and built the cities of San Lorenzo, La Venta, and Tres Zapotes. These, along with other remnants of the Olmecs’ existence, would later become archaeological sites.

The first Olmec head, Tres Zapotes Colossal Head One, was first discovered by archeologist Matthew Stirling in 1938. Sixteen other heads were subsequently found with one from La Cobata, another from Tres Zapotes, four from La Venta, and ten from San Lorenzo. Precise dating of the heads is difficult due to various factors such as their being moved or uncovered but it is believed that they were made anywhere between 50-200 years apart. All of the sculptures depict a helmeted man but each individual sculpture has its own set of unique facial characteristics. The sculptures are estimated to weigh about 40 tons and stand between 10-15 feet tall. All but two heads were composed of basalt boulders from the Tuxtla Sierra mountains which were as far as 50-60 miles away from where the heads were discovered. The two heads that did not utilize the basalt were the San Lorenzo heads and they were repurposed from earlier stone thrones. Traces of pigments and plaster on one of the heads suggests that the heads may have been painted at one point.

All of the authentic Olmec heads can be found in Mexico. San Lorenzo Head (10) is located at San Lorenzo Tenochtitlán Community Museum while San Lorenzo Heads (2) and (6) are at Mexico City’s National Anthropology Museum. Xalapa’s Anthropology Museum houses the remaining San Lorenzo sculptures. All of the La Venta heads are in Villahermosa. One of the Tres Zapotes Heads is in the Tres Zapotes Community Museum while its companion, along with the La Cobata head, is located at Tuxtla’s Central Plaza.