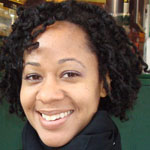 Zakiya Adair is an assistant professor in the Women’s Studies Department at the University of Missouri, Columbia.   She received a Ph.D. from the University of Washington, Seattle, in 2010.  Her undergraduate degree is in African American studies and philosophy from San Jose State University in San Jose, California. Zakiya, a California native, specializes in twentieth century social and cultural history of women and African Americans. Her dissertation focused on cultural manifestations of race, gender and class in the transnational performances of African American women entertainers in Paris, France, London, England, and Harlem, New York between World War I and World War II.

In 2006, Adelaide Hall made Great Britain’s list of the top 100 great black Britons. Hall was born on October 20, 1901 in Brooklyn, New York.  Her father, Arthur Hall was a part-time music teacher and pianist; and her second cousin was famed nineteenth century … END_OF_DOCUMENT_TOKEN_TO_BE_REPLACED

The 1927 Times of London (UK) obituary noted of Florence Mills, “There is no doubt that she was a real artist full of individuality and intelligence, and her premature death is a sad loss to the profession.”  Florence Mills was an internationally-recognized and multifaceted performer … END_OF_DOCUMENT_TOKEN_TO_BE_REPLACED

In 1925, Josephine Baker took Paris, France by storm, appearing on stage in “La Revue Negre” wearing nothing but a skirt of artificial bananas in Danse Sauvage.  Born Josephine Freda MacDonald in St. Louis, Missouri on June 3, 1906, she was nicknamed “Tumpy” because she … END_OF_DOCUMENT_TOKEN_TO_BE_REPLACED