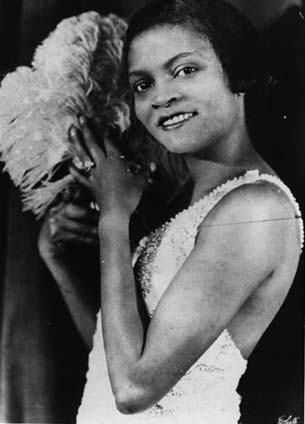 The 1927 Times of London (UK) obituary noted of Florence Mills, “There is no doubt that she was a real artist full of individuality and intelligence, and her premature death is a sad loss to the profession.”  Florence Mills was an internationally-recognized and multifaceted performer who paved the way for other black female stars during the Harlem Renaissance.

Born Florence Winfrey in 1896, in Washington, D.C. to former slaves Nellie and John Winfrey, Mills moved with her parents to New York City, New York in 1905. To help her financially struggling family, Mills and her two older sisters created “The Mills Sisters,” a dance and singing troupe that performed in theatres in Harlem, New York.

The year 1921 marked a triumphant period for Mills. She married Ulysses “Slow Kid” Thompson (a member of a jazz band known as the Tennessee Ten) and made her debut in the hit musical Shuffle Along, a victorious, all-black cast, musical comedy created by Noble Sissle and Eubie Blake.

The same year, Mills replaced Gertrude Saunders in the starring role of Ruth Little, which ran for more than 200 performances on Broadway. Her signature performance in Shuffle Along was her rendition of “I’m craving for That Kinda Love,” a love song that became the first of that genre to be performed in an all-black revue on Broadway.  Mills’s star performance helped make Shuffle Along, which is still considered the catalyst of the Harlem Renaissance by many cultural historians, the first successful all-black Broadway show in more than a decade.

Throughout the 1920s, Mills appeared in a number of landmark musical revues, including Plantation Revue (1922), From Dover Street to Dixie (1923), Dixie Street to Broadway (1924), and Blackbirds (1926). In Dixie Street to Broadway, Mills performed “I’m a Little Blackbird Looking for a Bluebird.” The song won her acclaim and led to her next show, the internationally-successful Blackbird Revue, which toured at the London Pavilion, in Paris, France, and other European cities.

At the age of 31, Mills became ill with tuberculosis during a tour that included over 250 performances.  She died in New York City on November 1, 1927 from an infection after surgery.  Three thousand fans attended her funeral in Harlem and thousands more saw her funeral procession as it moved through the black community.