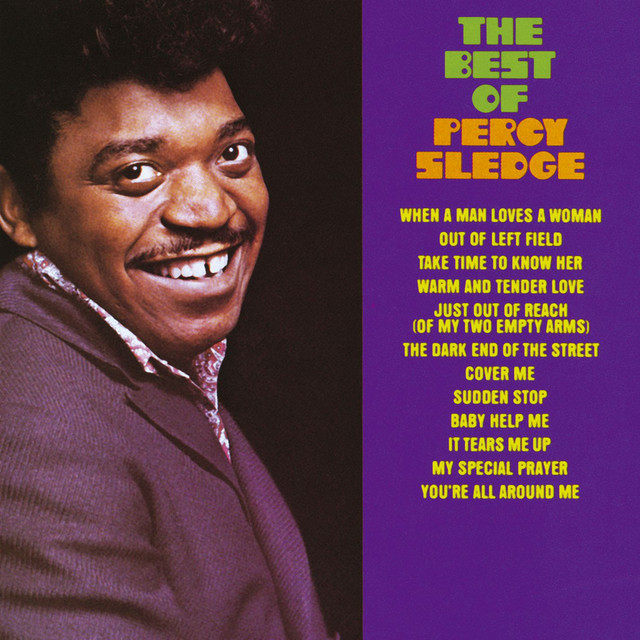 Percy Tyrone Sledge was an American R&B, soul, and gospel singer best known for his 1966 single “When a Men Loves a Woman.” Sledge was born on November 25, 1940, to Fannie Sledge Woods and an unnamed father in Leighton, Alabama. Growing up, Sledge worked in several agricultural jobs in the fields of Leighton, Alabama before taking a job as an orderly at Colbert County Hospital in Sheffield, Alabama. During the mid-1960s, he traveled across the South with the Esquires Combo on the weekends while working at the hospital on weekdays.

A former hospital patient who had become a friend of Sledge, introduced him to Quin Ivy, a record producer who after an audition signed him to a recording contract. Sledge recorded his first single, “When a Men Loves a Woman” in March 1966. The inspiration for the song came after his girlfriend left him to pursue a modeling career in 1965 after he was laid off a construction job. Bassist Calvin Lewis and organist Andrew Wright helped Sledge write the song which reached number 1 on Billboard Hot 100 and R&B charts in the United States and became an international hit. It became Sledge’s only million-selling record.

Later in 1966 Sledge released two other singles, “Warm and Tender Love” and “It Tears Me Up,” and two albums, When a Men Loves a Woman and Warm & Tender Soul. In 1967, he released three singles, “Love Me Tender,” “What Am I Living For,” and “Just Out of Reach (of My Two Empty Arms)” as part of his album, The Percy Sledge Way.

During the mid-1980s Sledge had a brief career comeback when his song “When a Men Loves a Woman” re-entered the U.K. Singles Chart peaking at No. 2 behind the reissued Ben E. King classic “Stand By Me.” During the early 1990s, singer Michael Bolton produced his version of Sledge song “When a Men Loves a Woman” in his album Time, Love, & Tenderness (1991). Bolton’s version hit No.1 on the U.S. Billboard Hot singles chart ironically 25 years after Sledge’s single reached the same position in 1966.

In 1994, Sledge released Blue Night. The album was nominated for a Grammy Award for the Best Contemporary Blues Album that year. Sledge released two more albums during his lifetime, Shining Through the Rain (2004) and The Gospel of Percy Sledge (2013). In 2007, Sledge was inducted into The Louisiana Music Hall of Fame in Baton Rouge, Louisiana. On April 15, 2015, Sledge died of liver cancer in Baton Rouge, Louisiana, at 74. Sledge was married twice during his life and was survived by his second wife, Rosa Sledge whom he married in 1980. He had 12 children during his lifetime.