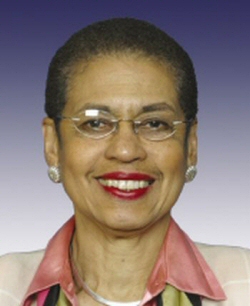 Eleanor Holmes Norton was born on June 13, 1937 in Washington, D.C. to parents Coleman and Vela Holmes.  Both her parents were government employees.  Growing up in a well educated and politically conscious household caused Eleanor Holmes to be very aware of the surrounding struggles for African Americans.  At the age of 12, she recalled watching protests against a Washington, D.C. department store which allowed black shoppers but refused them entry into its bathrooms.

In 1955, Eleanor entered Antioch College in Yellow Springs, Ohio where she became heavily involved with civil rights work.  While in college she headed the local National Association for the Advancement of Colored People (NAACP) chapter and became a local activist working to desegregate public facilities in Ohio.  The emerging civil rights movement influenced her decision to enter Yale University in 1960 with the intention of becoming a civil rights lawyer.  In 1963 Holmes worked in Mississippi for the Student Non-Violent Coordinating Committee (SNCC).  She graduated from Yale in 1963 with a Master’s in American Studies and a law degree in 1964.

Eleanor Holmes moved to Philadelphia in 1964 to work as a law clerk for Federal Judge A. Leon Higginbotham.  The following year she married Edward Norton and was admitted to the Pennsylvania bar as an attorney.  From 1965 to 1970 she worked for the New York office of the American Civil Liberties Union (ACLU).  In 1968 Norton was admitted to practice before the U.S. Supreme Court where in her first case she successfully defended the National States Rights Party, a white supremacist group that was denied a permit to hold a political rally in Maryland.  Between 1970 and 1977, Eleanor Holmes Norton headed New York City’s Human Rights Commission.  In 1973 Norton organized African American women from across the nation into the National Black Feminist Organization.  Four years later President Jimmy Carter appointed her the first woman to chair the Equal Employment Opportunity Commission (EEOC), a post she held until 1981.