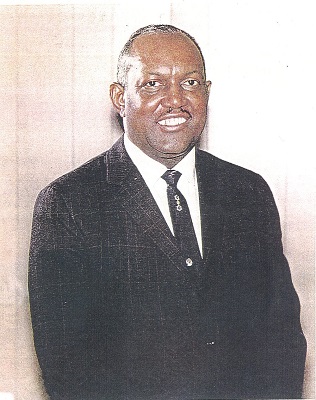 Visionary businessman Onie Burnett Granville, a Los Angeles, California Realtor, founded two black-owned and operated state-chartered banks in the 1960s, the Bank of Finance in Los Angeles in 1964 and the Freedom Bank of Finance in Portland, Oregon in 1968.  Both banks were the first of their kind in their respective cities and among the earliest black-owned banks in the West.

Born in Navarro County, Texas on June 28, 1916, Granville was one of five children born to Antwine Granville, a farmer, and Nillie Beavers Granville from Tyler Texas.  Onie graduated from G. W. Jackson High School in Corsicana, Texas and Tillotson College in Austin (now Huston Tillotson University), receiving his B.A. degree in 1942. He later enrolled at the University of Southern California where he did post-graduate work in real estate appraising, banking, and finance.

In 1963 Granville joined six business colleagues to form the Merchants Title Company. The following year he was elected president of the all-black Consolidated Realty Board. The same year (1964) Granville was appointed to the Office of State Inheritance Tax Appraiser for Los Angeles County by then-Controller Alan Cranston (later a U.S. Senator). He also worked with California Governor Pat Brown Sr. on the California Fair Housing Act/Rumford Act of 1963 which outlawed racial discrimination in home purchases.

In the early 1960s, Granville began to realize that many of his African American potential home buyers faced racial discrimination when they attempted to obtain home loans or when they tried to purchase property west of Western Avenue in Los Angeles. While black-owned Broadway Federal Savings and Loan, founded in 1948, provided some home loans, it could not meet the demands of African American would-be homeowners in the area and non-black savings and loan associations would not work with them.  Granville envisioned a full-service bank which offered checking accounts, certificates of deposit, as well as real estate, vehicle, construction, and personal loans. That institution opened as the Bank of Finance in 1964.  Four years later Granville relocated briefly to Portland, Oregon where he started a similar institution, the Freedom Bank of Finance.

In 1970, Granville became a co-founder and vice president of the West Adams Community Hospital.  Later that year he founded the Southern California Minority Capital Corporation, a publicly held small-business investment company with an initial capitalization of one million dollars.  in 1980 he founded the Inglewood Federal Savings and Loan Association in Inglewood, a heavily black suburb of Los Angeles.  In August 1977 Granville, Vernal Claiborne, Elbert Hudson, Norman Hodge, organized and all were the first directors of Pacific Coast Regional Job Creation Corporation which exists today as the Pacific Coast Regional Small Business Development Corporation.

Onie Granville was married to Theora Groves Granville.  The couple had no children.  Granville passed away in Los Angeles on September 21, 1998 at the age of 82.