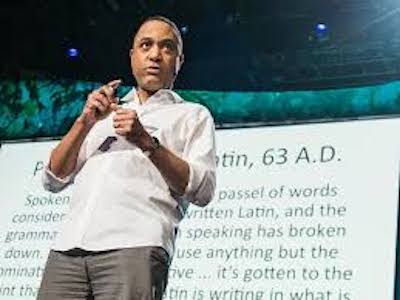 John Hamilton McWhorter V, an American academic and linguist, is associate professor of English and Comparative Literature at Columbia University. He is the author of number of books about language and race relations. His research also specializes on how Creole languages form and how language grammars change as the result of socio-historical phenomena. McWhorter is a social commentator who has written for Time, The Wall Street Journal, The Chicago Tribune, and the New York Times.

John McWhorter was born on October 6, 1965, in Philadelphia, Pennsylvania. His father was a college administrator and his mother taught social work at Temple University.  He attended Friends Select School in Philadelphia, and after the tenth grade, he was accepted to Simon’s Rock College located in Great Barrington, Massachusetts, where he earned his associate of arts degree. He next attended Rogers University where he received a Bachelor of Arts in French in 1985. He later received a Master’s in American Studies from New York University and PhD in Linguistics in 1993 from Stanford University. Soon after graduation, McWhorter was named an associate professor of linguistics at Cornell University where he taught from 1993 to 1995, before he became an associate professor of linguistics at the University of California, Berkeley, where he taught from 1995 to 2003. Since 2008, McWhorter has taught linguistics and American Studies at Columbia University where he is also associate professor in the English and Comparative Literature Department. Over his academic career, McWhorter has published several books on linguistics, including Power of Babel: A National History of Language and Our Magnificent Bastard Tongue: The Untold History of English.

In 2008 McWhorter also become a senior fellow at the Manhattan Institute, a conservative think tank. There he began to write as a social critic focusing his attention mainly on problems and issues affecting black America and building on his best-selling book released in 2000 titled Losing the Race: Self-Sabotage in Black America. In that book, McWhorter critiqued a number what he termed popular behaviors in African America, including anti-intellectualism particularly among black college students and the role of hip hop culture in retarding black progress. As a linguist, he was particularly critical of “Ebonics,” a movement among some educational reformers to promote inner-city black speech patterns as an acceptable alternative to standard English. With that volume, McWhorter joined a growing number of black neo-conservatives who challenged traditional black leadership and popular African American social and cultural patterns.

With the success of Losing the Race, McWhorter became a regular contributor to a number of publications including The New Republic where he served as contributing editor from 2001 to 2014 and a columnist from 2006 to 2008 for the New York Sun. McWhorter also has written columns regularly for The Root, The New York Daily News, and The Daily Beast. He also has appeared on public radio and television shows, including various episodes of National Public Radio, The Colbert Report, Real Time with Bill Maher, and MSNBC’s Up with Chris Hayes.

McWhorter characterizes himself as a cranky liberal Democrat who supported Barack Obama for president and gay marriage but who also supported the War on Drugs.  In January 2017, he was one of the speakers in the Linguistic Society of America’s Inaugural Public Lectures on Language series. He continues to write about language and culture both specifically as it pertains to African America and more generally to all Americans.