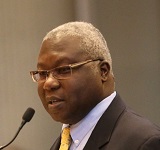 Jerry Large speaks during a brief ceremony honoring him in the Seattle City Council chambers on Monday, April 2, 2018, at City Hall.

Jerry Large retired from The Seattle Times in 2018 after nearly 37 years, including 25 years as a columnist. In his column he wrote about a variety of topics, but often focused on social justice.

Large, who was born in Clovis, New Mexico, January 15, 1954, is the middle of three sons raised by Viola Bailey Large. His parents, aunts and uncles grew up in sharecropper families in Texas and migrated in the late 1930s to Clovis, where they found employment as agricultural workers, janitors and maids.

Large earned a B.A. in journalism from New Mexico State University and worked at the Clovis News-Journal, the Farmington Daily Times, the El Paso Times, and the Oakland Tribune before coming to Seattle in 1981.

He has won numerous honors and awards including a J.S. Knight Fellowship at Stanford University, 2000-2001, and the 2009 Sam Kelly Award from the University of Washington Multicultural Alumni Partnership. He received the 2017 RESULTS International Cameron Duncan Media Award for reporting on poverty, the Faith Action Network Justice Leadership Award, and the 2017 Noel Markwell Media award from the International Society of Political Psychology.

Large is a member of the Alpha Omicron Boulé of Sigma Pi Phi Fraternity and serves on the boards of Blackpast.org and The Northwest School.

He and his wife, journalist Carey Quan Gelernter, have traveled in Europe, Africa, Asia, and the Americas. Their son, Tao Large, is working toward his Ph. D in bioinorganic chemistry at Stanford University.