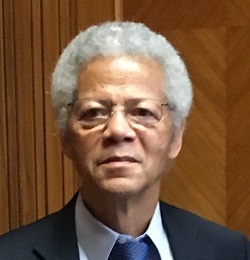 Albert S. Broussard is professor of History at Texas A&M University, where he has taught since 1985. Professor Broussard has published six books, Expectations of Equality: A History of Black Westerners (2012), Black San Francisco: The Struggle for Racial Equality in the West, 1900-1954 (1993), African American Odyssey: The Stewarts, 1853-1963 (1998), American History: The Early Years to 1877, and The American Republic Since 1877, and The American Vision (co-authored with James McPherson, Alan Brinkley, Joyce Appleby, and Donald Ritchie).

In the spring of 2005, Broussard was the Langston Hughes Professor of American Studies at the University of Kansas. Broussard also served three terms on the board of directors of Humanities Texas and as a consultant to the Texas Education Agency. He participates regularly in teacher training workshops sponsored by Humanities Texas and school districts throughout the state of Texas. Broussard is currently writing a history of racial activism and civil rights in the American West from World War II to the present.