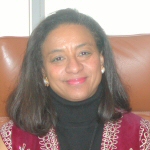 Since March, 2008, Monica Jane Benton has served as a King County (Washington) Superior Court Judge.  Born in Augsburg, Germany and later educated in the Taipei American School, Monica J. Benton gained an international perspective at an early age. As the adopted daughter of Captain B. J. Benton and his wife Velma Owens Benton, she became a naturalized U.S. citizen in the federal court located in Tacoma, Washington. In the same federal court twenty years later, she began her legal career as law clerk to the Honorable Jack E. Tanner, the district’s first African American judge. Providently, forty years after her naturalization, she was in 2000 appointed a U.S. Magistrate Judge in the same court and consequently became the first African-American woman to sit in that U.S. Court.  Judge Benton held that judgeship until 2008.

Prior to her appointment to the United States District Court in 2000, Benton sat as a state-court judge for five years on the King County District Court. The appointment succeeded a decade of public service to the Criminal Division of the Office of the Prosecutor for King County. Benton’s area of expertise in child abuse prosecution led to a one year sabbatical serving as Senior Prosecutor for the American Prosecutors Research Institute, a think tank which provided both technical assistance and scholarly analysis.

Her current passion is the pursuit of American civil rights history. In her chambers she displays her collection of many important speeches, letters, and eyewitness biographies of those in the movement, including actual recordings taken from the Southern marches. Benton studied the narrative histories of the 1954 U.S. Supreme Court Justices as part of her participation in the 2004 re-enactment of Brown v. Board of Education’s oral argument before the Washington Supreme Court, sitting as the Warren Court. Additionally, she is a past-president of the Loren Miller Bar Association, an organization of African-American attorneys, and currently serves as editor of “The Petitioners,” the bar’s annual newsletter. Formerly the bar’s historian, she coordinated the production of a collage of biographies of the bar’s founders and the city-wide exhibition of “The Rights of All,” which celebrated the 200th anniversary of the signing of the U.S. Constitution.

Benton’s service to the community is seen in a myriad of associations including the Ninth Circuit Magistrate Judges Education Committee. Her commitment to judicial education began on the Research and Education subcommittees of the Washington State Minority and Justice Commission, while serving simultaneously as faculty member of the Washington Judicial College to develop diversity and access issues in state-wide judicial forums. Other areas of Benton’s civic interest include work for local and national charitable organizations as the YMCA and Links, Inc., and Youth Advocates.