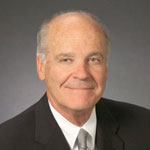 Justice Gerry L. Alexander, former Chief Justice of the Washington State Supreme Court was elected to an open seat on the Court in 1994 and re-elected to the Supreme Court in 2000 and 2006.  In 2000 he was elected by his colleagues on the Supreme Court to a four-year term as chief justice.  In 2004, Chief Justice Alexander was elected to a second four-year term as chief justice, the first chief justice in Washington’s history to serve two consecutive four-year terms as chief justice.  Justice Alexander joined the state’s highest bench with over two decades of trial and appellate court experience behind him, having served as a judge of the Superior Court for Thurston and Mason Counties from 1973 through 1984, and as a judge of the Court of Appeals, Division Two, from 1985 through 1994.  Justice Alexander served as Chief Judge of the Court of Appeals, Division Two, from 1989 to 1990 and in 1993.  Prior to commencing his lengthy judicial career, he practiced law privately in Olympia with the firm of Parr, Baker, Alexander, and Cordes.  He has deep Washington roots, graduating from Olympia High School.  After receiving an undergraduate degree in history from the University of Washington, he served as a lieutenant in the United States Army Infantry for three years, and then returned to his alma mater to earn his J.D. in 1964.
Justice Alexander stepped down as Chief Justice of the Washington State Supreme Court in 2010.  He retired from the Court in 2011.