Yamoussoukro is currently the de jure capital of the nation of Cote d’Ivoire. The city had a population of 242,744 people in 2010. Yamoussoukro is located 274 km, or 170 miles, from the country’s de facto capital, Abidjan, where most of the government offices and foreign embassies remain. Although Yamoussoukro has some government agencies, most of its economy revolves around nearby fishing and forestry industries and the manufacture of perfumes. The city is divided into four different divisions: Attiégouakro, Didiévi, Tié-diékro, and the surrounding Commune of Yamoussoukro, which contains 169 villages and hamlets.

The history of Yamoussoukro dates back to 1901 when Yamousso, the son of the regional political leader Kouassi N’Go, ran the village of N’Gokro at the time of French colonization. The village had 475 residents and was one of the 129 Akoué villages in the region.  In 1909 the Akoué revolted against the newly installed French colonial administration.  They burned a French outpost called the Bonzi station which was located seven kilometers, or 4.35 miles, away from N’Gokro. Simon Maurice, a French administrator at the Bonzi station, was spared from death by the personal intervention of Kouassi N’Go.

After the revolt was put down Simon Maurice transferred the French military outpost to N’Gokro.  In gratitude, the French built a pyramid as a memorial to Kouassi N’Go and the town of N’Gokro was then renamed Yamoussoukro to pay homage to its political leader.  In 1929 the French named Félix Houphouët-Boigny who was born there, in 1905, the chief administrator of the town.  Over the next four decades, Yamoussoukro remained a small commercial center for a surrounding agricultural region.

When France granted Cote d’Ivoire independence in 1960, Félix Houphouët-Boigny became the nation’s first president, serving until his death in 1993.  Beginning in 1964, Houphouët-Boigny sponsored the city’s rapid growth, building a modern highway from Abidjan to Yamoussoukro ostensibly to encourage economic growth in the interior of the nation, but mainly because of his long connection with the area.  In 1977 he gave his private plantation to the state to enlarge the city’s boundaries.  Because of his influence developers built hotels and other facilities that increased Yamoussoukro’s prestige over surrounding communities. In March 1983 Houphouët-Boigny persuaded the Cote d’Ivoire National Assembly to make Yamoussoukro the administrative and political capital of Cote d’Ivoire.  Despite this new designation, the transfer of government functions has proceeded slowly as most major government offices remained in Abidjan. 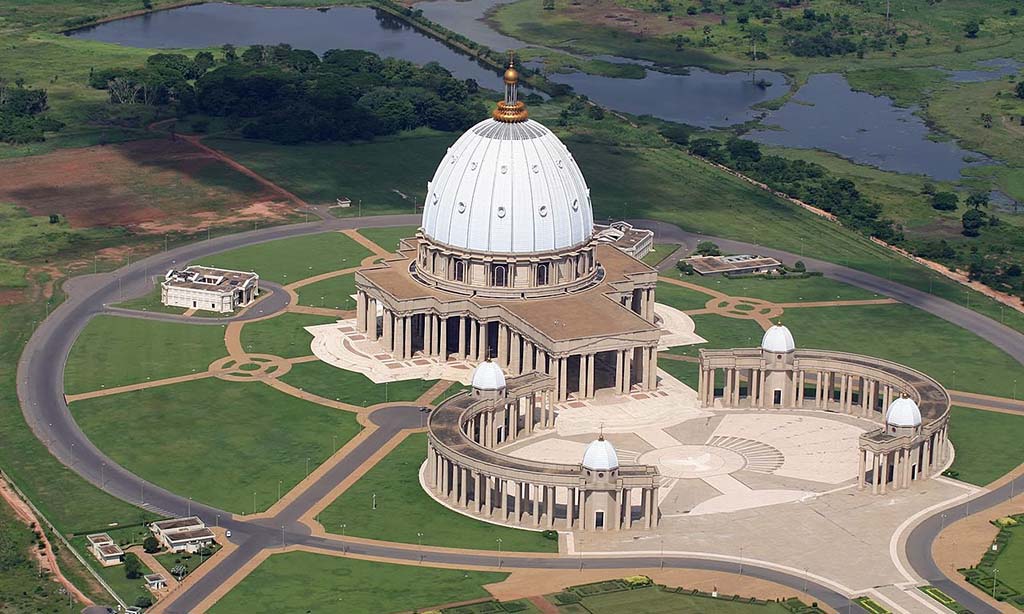 Nonetheless Yamoussoukro has structures that reflect its importance as a national capital.  The Basilica of Our Lady of Peace of Yamoussoukro, which is physically the world’s largest Christian Church, was modeled after St. Peter’s in Rome, Italy and was constructed between 1985 and 1989. The Basilica was consecrated by Pope John Paul II on September 10, 1990.  Other important buildings around the city include the Yamoussoukro Mosque, the Félix Houphouët-Boigny National Polytechnic Institute, and the Félix Houphouët-Boigny Foundation. The Kossou Dam is also nearby as is the local airport, one of only two in Africa that were large enough to accommodate the French Concorde jet.