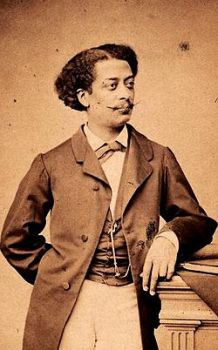 Composer and violinist Jose Silvestre White was born in Matansas, Cuba in 1835 to Don Carlos White and an Afro-Cuban mother. His father gave White his first instruction in violin, and he later studied with Jose Miguel Roman and Pedro Lecerff. In 1854, at eighteen, he gave his first concert performing themes from Rossini’s William Tell, and two of his own compositions, accompanied by Louis Moreau Gottschalk.  Gottschalk enabled White to go to France and attend the prestigious Paris Conservatory.  There he studied with the eminent violinists and composers, Jean-Delphin Alard, Henri Reber, and Ferdinand Taite. In 1856, after only a year of study, he won the Grand Prize in violin from the Conservatory. By 1858 he began a tour of Europe, the Caribbean, South America, and Mexico.

When his father became gravely ill, White returned to Cuba and did not renew his studies in Paris until 1860. The Parisian press gave his graduation recital very positive reviews. Jean Delphin-Alard invited White to play concerts with the Societe Alard-Franchomme, and when Alard became ill, White briefly took his place as a teacher at the Paris Conservatory.  Immersed in the renowned music world of Paris, White was particularly productive the 1860s. In 1861 he gave four public performances that attracted substantial attention and praise. He composed Six Grandes Etudes pour Violon, op.13, which was approved for instruction at the Conservatory. Most of White’s compositions were written for violin and piano. He performed La Bella Cubane, for example, at numerous concerts.  His Concerto for Violin and Orchestra in F-Sharp Minor (1867) was also widely applauded.

White was a member of Societe des Concerts du Conservatoire, and he created new chamber music groups such as Societe des Trois Anciens et Modernes with Paul de la Nux and Jules Lasserre and Societe des Musique de Chamber. Critics disapproved of the first ensemble because it relied too much on German music but the last group won recognition for incorporating more French selections.  In 1875-1876 White toured the Americas. He was twice a guest soloist for the New York Philharmonic, and gave additional concerts with orchestras in Boston, Massachusetts, Washington, D.C., and Philadelphia, Pennsylvania. He lived in Brazil from 1877 to 1889. There he became the director of the Imperial Conservatory in Rio de Janeiro as the court composer of Emperor Pedro II.  In 1889 he returned to Paris where he taught violin, composed music, and performed concerts.  Some of his more famous students were Jacque Thibaud and George Enescu.

White died in Paris in 1918. He was 83. Cuba issued a postage stamp with his likeness in 1958 to honor him.  His music has recently seen a revival in two recordings, Violin Concertos by Black Composers of the 18th and 19th Centuries (1997) and Cancion Sin Palabras (2002), and in 21st Century performances by The IberoAmerica Ensemble.